Hi lovies!  Sorry for this being so late but for the next few days I’ll probably be doing one long post for the day.  I had a project come in that needs some attention and focus, so that’s where my mind is at. 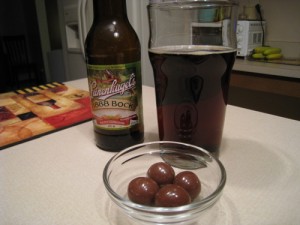 Ooo we tried a new beer last night!  A boch and this is a first for both of us.  It was the 1888 Boch by Leinenkugel (dags on that name though! It’s even bigger than mine!).  And I had some malt balls, only two because I was a good A last night.  The beer was so yummy!  We watched another period of a Pens game and then around 9ish I headed up to bed to read.  I read for 45 minutes and called it a night.  Wooo!

Since I wasn’t running this morning, I tried to sleep in a bit.  I slept till after 7am which is a good 9 hours of sleep.  Awesome!  Came downstairs and saw that it had rained overnight.  Figures since Scott just put the paper and cardboard out to be recycled. :p 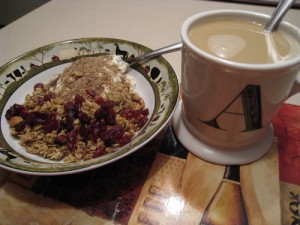 I debated about what to do for breakfast and finally decided on yogurt since I didn’t get to have any at all yesterday.  2% fage with a small scoop of vanilla protein powder, 1 TBSP of ground flax, some bear naked fruit&nut granola, and some cranberries.  So good!  I love yogurt.

Along with morning coffee which was just okay this morning.  I checked some emails, did some bloggy work, and then did some worky work.

I got Scott up a little later and then I headed into the kitchen to do some dinner prep while I had the time.  I knew I would be working sort of late today, so I made dinner ahead of time.  Then when it’s time to eat, I just have to pop it in the oven.  YaY!

Today is such a gloomy yucky day.  And spring is on the way.  It’s not here but it’s coming soon.  I can tell because the weather is getting crazy outside.  Today alone we are having temps in the 40s with rain.  Then a thunderstorm, then snow this evening with temps turning frigid.  Lovely.  THAT is spring weather in Ohio.

Lunch time rolled around and I pulled out a sandwich thin! 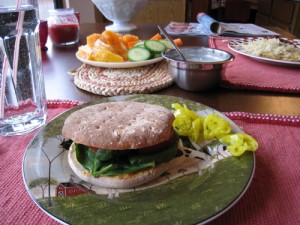 I made a sandwich with roasted red pepper hummus, spinach, thick slice of tomato, and some banana peppers.  Extra peps on the side.

In the middle is leftover ranch dressing from Monday, with carrot sticks and cucumber slices.  And also a tangerine and an orange.  That was my first time having a tangerine!  So sweet and yummy!  I probably like them better than clementines although I could deal without the seeds.

After lunch I took Rocky out for a quick walk around the block.  My foot is feeling much better today although not perfect.  It was really windy when we were out and I could tell some nasty weather was going to blow in soon.

When we got back home, it was work for me because I got the final go-ahead to start on a project.  I took a break after a few hours for a quick snack of more yogurt. 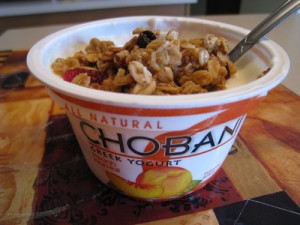 My grocery store got some Chobani!  And I had to try it out.  This is the peach flavor with a little sprinkle of granola on top.  Not quite as thick as fage and a lot sweeter than the fage peach.  I liked it enough but probably would not have this on hand or as a staple in the house.  I’ll stick with fage.  I ate 1/2 and gave the rest to Scott.

Then more work and I completed part of the project!  Woo!  By that time it was the end of the day and time to call it quits.  I moved to the couch and worked on this entry.

And also got dinner in the oven.

Today was the veggie shepherd’s pie day and what a great day for this dish!  With the weather being so nasty yucky, this was a good choice!  While it was heating up, I had a small snack because I was hungry and would not survive the hour while dinner cooked. 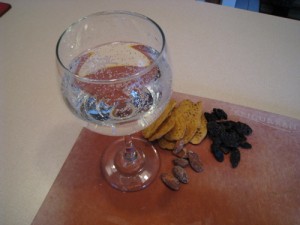 Some sweet potato chips, raisins, and smoked almonds washed down with straight seltzer 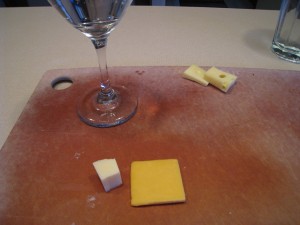 Then I had a slice of cheddar.  The other cheese I did not have and the cheese in the back was Scott’s. 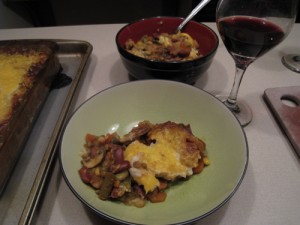 Then dinner!  Hooray!!  With a small glass of red.  We watched the final period of the Pens game while eating.  Dinner was fabbo and totally hit the spot.  Scott kept telling me how awesome it was in between bites.

Now I’m off to get in my jammies and watch some more TV before calling it a night.  Later gators!