Hi guys!  Don’t worry, I’m almost over myself.  Some couch time and some reading time will put me back in the right mind space.

After my breakfast “oh woe is me” post, I ran Rocky out for a short walk.  I thought I could get away with a longer walk if I walked slowly but no dice.  My foot started aching and it was really cold and windy outside!  So I cut the walk short and we headed back home.

Once home I did some bloggy stuff, put away laundry, and did some worky stuff.  Then it was time to make lunch!  I wanted something yummy and comforting.  Grilled cheese and soup it was! 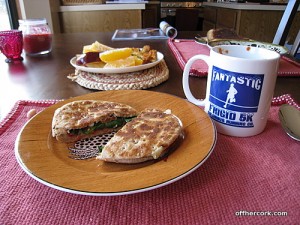 My grilled cheese was using a sandwich thin and it has spinach, tomato slices, and some swiss.  On the side is Amy’s tomato soup that I spiced up just a bit with garlic powder, Italian seasoning, and buffalo sauce.  That’s my race mug!  Only half of that mug is full of soup.  In the middle was a leftover apple from my snack, an orange, and the leftover zucchini sticks.  I only had about 1/2 of everything again, although no apple. (I realize my mug is all sloppy, please just ignore it.  Thx!)

After lunch I zoned out and read for a bit.  Then it was off to the grocery store!  Where I totally loaded down the cart with fruit and veggies.  I was in heaven!  Also?  My store finally has sandwich thins! Before I got them from an obscure grocery store but now my regular store has them.  Hooray!  Hours later we made it back home.  I had visions of making a veggie shepherd’s pie today but that got busted.  It was late, I was tired, and hungry.  A shepherd’s pie would take way too long.  I opted for an easier but still tasty route. 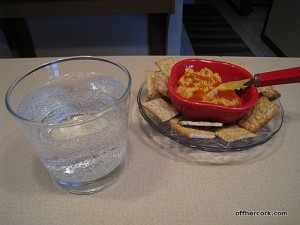 First though was a snack!  With new crackers!  Kashi roasted Asiago crackers.  Oh my goodness, love them!  Along with some hummus.  I had five crackers, 3 in hummus, 2 plain.  I saw the serving size was 15 crackers!  Does that seem like a lot to anyone else?  I also had some seltzer to sip on. That may or may not be buffalo sauce on top of the hummus. I’m taking the 5th. 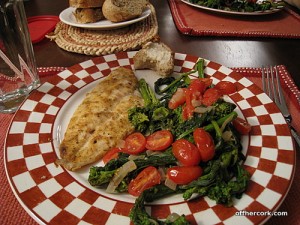 Dinner was baked flounder and some sautéed broccoli rabe with grape tomatoes.  YUM!  I also made some rice for Scott.  And there was multi-grain bread to go along with dinner.  I had that small nubbin’ with butter and then two more nubbin’s, no butter.

Now it’s time for clean up and I believe there might be a new beer in my future.  Then I’m hoping to hit the hay early and get started early tomorrow.  I’ve got lots to do!