Last night the new pants worked out great and will be good placeholders till I can get some appropriate BDUs.  Scott’s are camo (since they are military issued) and I need either solid black or green for class.  Our instructor isn’t going to tell us we can’t wear camo but it’s not the preferred color, follow?  Anyway, last night during training we were working on some take down moves where the person defending drops down to one knee and does some stuff to the other person’s legs.  Yes super basic description because otherwise I would be here all day trying to explain it to you and I don’t feel like making a photo presentation of it.

In reality, the goal is to drop down and smash your knee on to the other person’s foot resulting in pain and distraction for that person.  However, for training purposes you kinda want to avoid actually dropping on the foot because 1. it flipping hurts and 2. injuring training partners kinda makes them not want to train with you anymore.  To shorten this up because it’s way too long already, Scott and his 160lb self dropped on my foot instead of next to it.  It hurt like a mothereffer.

When we got home and I looked at my poor left foot, it was already black and blue.  My first thought was “how is this going to affect my running this week?”  And answering myself, I said, “Probably a lot.”  I took a picture but I will spare you my foot because I hate looking at people’s feet (so gross) so I imagine there are others who feel the same.

To sort of console myself and also to warm up because I freezing last night, I made us some tea and a snack plate. 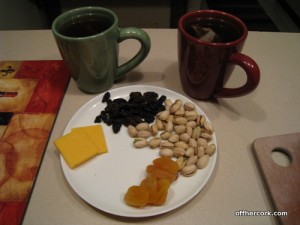 Orange spice tea with a bit of honey.  On the plate:

I had one slice of cheese (so good!), two apricots, some raisins and some pistachios.  Not a ton of stuff, just a nibble.  I wanted an apple but I keep those in the fridge and I was too cold to snack on one!  Can’t heat them up because cooked fruit, eeww.   I got to bed super late last night as it took me a while to decompress.

My alarm went off at 6am and I debated on if I should get up or not because I wasn’t sure if I could run.  I decided to get up and see how life goes and roll with it.  I got Rocky taken care of and then pulled my experiment out of the fridge that I made last night. 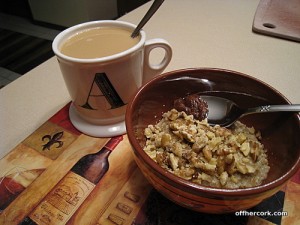 Steel cut oats!  I bought a bag of Bob’s Red Mill steel cut oats ages ago but have been too afraid to try them.  I wasn’t sure if the soymilk would be able to handle the longer cooking time.  Is that weird to think that?  I have no idea but soymilk is what I have on hand.  I have some 1/2 and 1/2 but that is strictly for back up creamer for coffee, and things that need a little cream to them (mashed potatoes, gravies, rouxs, for example).  We don’t drink milk or keep milk on hand.  So last night I poured 1/2 C of oats into a bowl and added 3/4 C soymilk and let it sit over night for a soak.  Thinking this would help cut the cooking time a bit.

I put that into a pot this morning with a little more soymilk and let it simmer for a while.  I added some cinnamon and brown sugar as well (we are also out of bananas).  It was cooking and going to town but kept absorbing all the soymilk so I had to add more and then add some more. :o  It got to a point where it was edible so I decided to go about eating it at this point.

I only added some walnuts and dark chocolate PB as my mix-ins because we’re almost out of cranberries as well.  I know!  My house is like bare of all my essential items.  I think I could have added some more soymilk because while tasty and the texture was good, it was a little too thick.  But this was my first attempt so I’ll keep plugging away till I get it right!

I had that with my morning coffee, back to my A mug.  Wheee!  Admittedly I like the A and S mugs much better than the R mugs.  I feel like the R mug got cheated on the pattern because it’s not appealing to me at all.  And to think, I wasn’t even going to get A and S mugs, just R mugs!

I did some bloggy stuff and what not and finally decided to put my running shoes on to see how it would go.  My foot is more black and blue today and it aches.  The spot where I got hit is conveniently located where the shoe bends as you walk, causing the shoe part to press down on my bruise.  Ouch.  Running out for sure.  I might be able to walk Rocky but only for a short distance I think.  I’ve been rubbing it with Thai Oil (similar to Tiger Balm, if you know what that is) but it hurts and I’m wondering if I should take some ibuprofen.  MT might get bypassed today as well.  All of which is causing me to be a

“Rolling with it”, isn’t going so well.  I’m trying so hard not to be grumpy about my foot and am not succeeding.  Please do not misunderstand, I’m not mad at Scott.  We were training and part of understanding and accepting martial arts is to realize that you are going to walk away with bumps and bruises.  It happens, you deal with it and move on.  What I’m crabby about is the situation and the fact that running has been taken away from me for who knows how long.

I wanted this week to be a good running week.  I feel like last week was not.  I didn’t run as much as I wanted, either missing a day entirely, or only running shorter distances.  I need to get back to running 4.5 for each of my runs again because how else am I going to build up to 6 miles, and then to 13?  I’m feeling pretty stagnant right now.  And of course there is the weight loss issue, I’m not at my goal yet but so close I can see the light at the end of the tunnel.  How am I going to drop these last few pounds if my running as slacked off?  Running is what got me here in the first place.

The reality of the situation is that my foot will probably be better in a few days and I will be back to running and fine.  A bad week of running, and a few days off of running is not devastation (right?).  Besides, all I’m dealing with is a bruise and some shorter runs.  Not anything traumatic or super serious.  I need to embrace that and use this down time to focus on something else that needs my attention.  All of this I realize, I’m just having trouble accepting it right now.

Today seems like it would be a good “comfort” day and I think I could use that.  Do you have Negative Nellie days and how do you deal with them?

P.S.  I just had an apple and some tea for a mid-morning snack.

Peppermint tea and a red delicious.  Marvel at my color coordination going on.