Hi gang! Let me start off by telling you that I split TWO Cabin Fevers with Scott last night while we sat on the couch and watched TV. Do I feel guilty about it? Nope, they were fabbo and it was his birthday! He still had more than I did but they were oh so tasty and I was loving every minute of it. 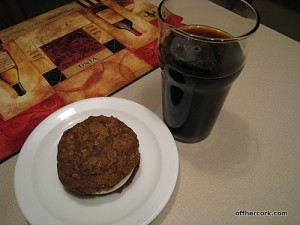 I will also tell you that we split a sweet treat! His birthday dessert was a big honkin’ oatmeal cream pie that we bought from WF. I figured I would have a bite or two and be done with it. Sweets aren’t really my thing plus I assumed the cream in the middle would be way too sweet sugary for me. Well I was wrong and we split that cookie between us while sipping on the 2nd Cabin Fever. Whoa, definite indulgent night for me! But it’s all good. We watched two episodes of Planet Earth and then like an old lady, I headed up to bed at 10:30pm.

I woke up this morning at 7:30, so not a shabby night of sleep. I was surprised how cold it was when I took Rocky out for his potty run. Brrrr! Sadly I could not come in and make oats because we still haven’t gone to the store and it’s getting bare bones around here oat and veggie-wise. 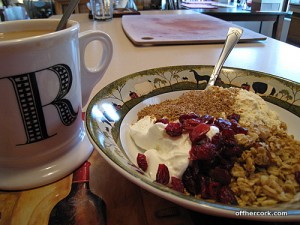 Instead I opted for some yogurt with:

All with morning coffee + creamer this morning which was amazing! The coffee was spot on! I read some blogs and tried to get a little more caught up on office things. I also posted Caitlin’s feature for this month’s Feet on the Street! I’m really excited about this feature and hope you stay tuned each month.

Then I took Rocky out for a walk and was surprised by how cold it was (again)!  I checked the temp and it was in the upper 30s and super sunny out.  I still played it safe and wore my winter jacket and toboggan and thank goodness I did.  It was really cold and windy.

So the walk got cut to only a mile.  Ah, Mo’ Nature can be a tricksy one.  The sun threw me off and I was daydreaming about Spring.  Stepping outside, I was smacked back to reality and that it’s still winter.  Booo.

Came back home to finish up some laundry and do more work/office related things.  Then it was time to make lunch.  Yesterday’s meals left me feeling a little blah (except for dessert, I liked that!).  There wasn’t enough veggies or fruit involved yesterday.  Today I’m trying to change that. 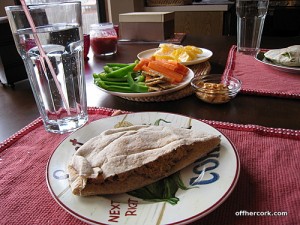 For lunch I had 1/2 a WW pita stuffed with romaine and some curry tuna salad. Hickory smoked tuna, pepperoncinis, sunflower and pumpkin seeds for crunch, small scoop of mustard and olive oil mayo.  Seasoned with pepper, red pepper flakes, curry powder, and garlic powder.  In the middle are some carrot sticks, green pepper, and kashi roasted veggie crackers to dip into roasted red pepper hummus.  And also an orange.  Veggies and orange split with Scott.

After lunch it was more cleanup and chores and you know, basic life stuffs.  Which is what I’m headed off to do now.

In case you’re curious what I got Scott for his birthday, I’ll show you. 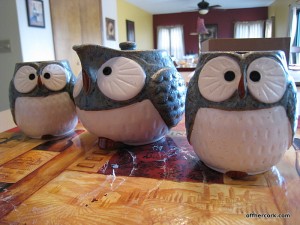 Scott loves owls (and so do I!) so I bought him this little tea/sake set that was made in Japan.  It’s so cute!  And I found it as I was looking around for some other things.  I am in love with the little owl mugs.  He loved it and now we’re planning a little Japanese tea party!