Warning: Parameter 2 to WPE\Site_Preview::the_posts() expected to be a reference, value given in /home/customer/www/foodembrace.com/public_html/wp-includes/class-wp-hook.php on line 303
 Pita Pizzas | Food Embrace 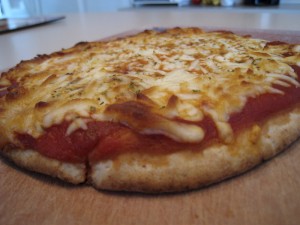 When I was in middle school it was the 80s.  Hair bands and mall teen pop queens were in their prime.  And the thing to do back then was hit up the skating rink on Friday night.  Especially when you lived in a super small town and there was nothing else for you to do at that age.  The skating rink was a happening place and I taught myself how to skate.  And backwards skate.  And skate going around the corners with my feet turned out, heels touching.  My favorite thing to do was skate backwards and stop with my stoppers coming to a sliding halt.  My skates were white with blue wheels and a blue stopper.  And Velcro because when you are at the skating rink, it is all about the skating and not about wasting time lacing up your skates.  Oh and secretly crushing on the boys who preferred video games until the couples skate was announced.  Eventually I out grew my Velcro skates and moved on to bigger, more “adult” skates that I did have to lace up. I figured out a way to do it quickly with flair and grace.  I was still sporting blue wheels and a blue stopper though.  And, no, never pom-poms on my skates. I preferred the smooth classic chic look.

My favorite drink that I got every time I was at the rink was a “graveyard”.  This was a slushy that had all the syrups mixed in.  It became this deep purple color and it was the best drink a 12 year old could ask for.  The straw of course had the little scooper at the bottom so you get to the extra ice.  If I had extra money burning a hole in my jeans pocket then I got a slice of pizza.  Oh it was just some cheap frozen cardboard pizza run through a little toaster but to me it was perfection.  The cheese was all melty and stringy while the crust was crunchy and perfectly toasted.  I loved when I was able to get skating rink pizza!  Never had it again in my adult life until one day I got the bright idea to make a pita pizza.

It was a late night that found Scott and I both hungry.  We didn’t want anything huge but needed something substantial.  “Pita pizzas!” I said.  How easy is that, and pitas are good for you too!  So I made us some and heated them in the oven.  When they turned golden brown I pulled them out and served them up.  My first bite was heaven and I yelled, “OMG these taste exactly like skating rink pizza!” which I think I scared Scott a bit with my unbridled enthusiasm.  Immediately I was transported back to the rink with my blue and white skates eating a slice of pizza and sipping on my graveyard.  What a nice memory.

And I’ve been making pita pizzas for us ever since (I made one for Scott today!).  It’s a quick thing to make and pretty healthy when you break it down.  Even white pitas have loads of protein, are low fat, and low in carbs.  So today I bring you a concept more than a specific recipe.

Preheat your oven to 400 and line a cookie/baking sheet with foil.  Spray with nonstick spray.  Put pitas on the cookie sheet and top with sauce, cheese, and toppings.  Bake for about 10 minutes or so until the cheese is bubbly and golden.  Remove, cut into 4 slices and serve! 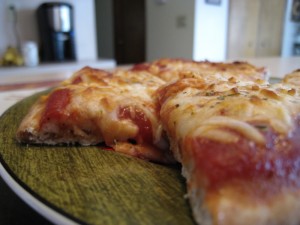 My favorite way to make a pita pizza is sauce and plain old shredded moz cheese. Sprinkle some Ms. Dash Italian blend on top and call it a day. These are great for parties and get-togethers because everyone can make their own! Have out a bunch of different cheeses and toppings so that people can pick what they like. Making sure to have plenty of meat options (sausage, ham, pepperoni) and veggie options (onions, peppers, spinach, tomatoes).  You can put out salsa and beans as well for topping choices. Since people are making their own they have more freedom over what they would like to eat. It makes for a fun activity and gets everyone in on the cooking!

And you can also grill these.  The side that’s going to be on the grill, brush with a little olive oil or veggie oil.  Top how you like, toss on the grill and cover for a few minutes till the cheese is melted and the pita is crispy.

These are simple, quick, and awesome to eat.  And if you’ve had skating rink pizza then perhaps these will bring back memories for you as well!

Enjoy guys! And remember: always play with your food!