Warning: Parameter 2 to WPE\Site_Preview::the_posts() expected to be a reference, value given in /home/customer/www/foodembrace.com/public_html/wp-includes/class-wp-hook.php on line 303
 January 9th, 2009: Breakfast and Lunch | Food Embrace

Hi guys!  I’m having such a great Friday so far, wheee!

Last night I had another glass of red as I sat down on the couch.  Scott was using the new aerator on the wine even though the wine had been opened for some time.  Our second glass he poured through the aerator and then those glasses sat there for a bit as I typed up my blog post and such.  By the time we sat down on the couch the wine was icky!  It was all bitter and just yucky.  I couldn’t drink it all and only had a few sips. 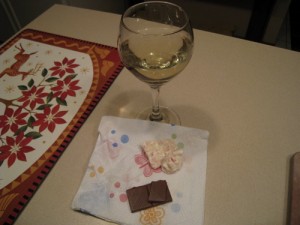 I was bummed because I wanted a glass of wine!  So I moved onto a riesling.

I was also craving some chocolate and since I rarely crave chocolate I decided to just go with it and have some.  On the napkin is 2.5 pieces of super creamy Lindt milk chocolate and also two small pieces of my peppermint bark.  The milk chocolate was enough so I didn’t eat the peppermint.  Yum!  So good and totally hit the spot and it was perfect with the riesling.  We finished the Pens game from Tuesday and they finally won a game.  YaY! 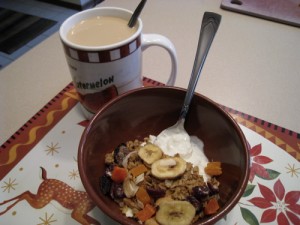 I decided since it was Friday to sleep in a bit this morning or as long as Rocky would let me.

I got up about a quarter of 8am to start my Friday.  I took my time eating breakfast and doing some bloggy stuff.  I had some 2% fage with banana nut bear naked and also a little bit of tropical trail mix.  Along with some coconut cream coffee + creamer.  Island morning!

I woke Scott up at 9am and then headed out for my run.  Oooo it was cold!  It had to have been below 20, not much, but for sure in the teens for my run.  I also kicked butt on my run this morning and did 4some miles.  I don’t think it was quite 4.5 but for sure it was over 4.  Yeah me!  It was so nice to be out and running for that long. 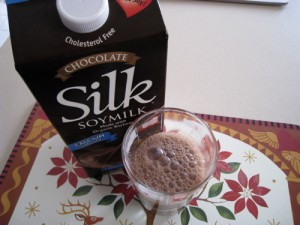 I had some CS and then decided to take Rocky out quick so I wouldn’t have to go back out later.  And also the weather was supposed to turn at some point and better to play it safe and get his walk done in case we can’t go later.  It was so cold!  The wind started picking up at that point and I was glad I decided on just a short walk.

Once we got back home I changed into some recovery clothes and did my yoga stretches.  Today was the best day of that so far!  No distractions and I didn’t hit anything as I was laying down and stretching (like smacking my hand into Rocky’s bed).  I felt awesome after my great run and then fabbo stretch!

I came downstairs and did more bloggy things and then I made us some lunch. 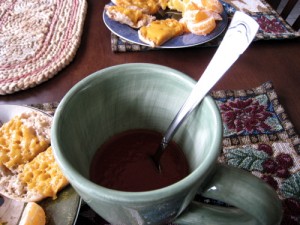 Have I ever mentioned my love for soup?  I could eat soup everyday and be a very happy Andrea.  Today was new, it was Amy’s tomato soup.  It is by far the best tomato soup I’ve ever had.  It was creamy but not too tart or too sweet.  It was perfect and I’ll for sure buy this again. 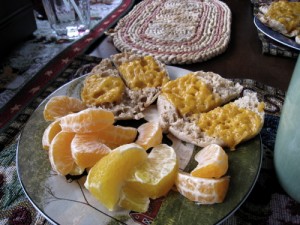 On the side is my orange plate. :p  One clem, 1/2 an orange and a toasted honey wheat english muffin with a slice of cheddar.  This lunch was one of my better creations and I loved it so.  Especially on this cold snowy day.  I ate everything except for 1/2 of the muffin, so I had 1.5 slices of it total.  Scott ate the other half.

I noticed on the english muffins, the package said double the fiber, and that there was 8g of fiber per serving.  That’s more than the cinnamon Puffins.  However the muffin did not leave me bloated or yucky feeling at all.  Perhaps it has to do with how the fiber is processed into the product and what exact kind of fiber it is?  I thought it was interesting.

After lunch and cleanup, it was time to get started cleaning the house.  Cleaned from top to bottom and now I’m sitting down typing up my entry.

Soon I’m going to shower and then we are having dinner out with some friends tonight.  Hooray!  It’s a new restaurant to us so we’ll see how it goes.  I’m going to come clean with my friends and tell them about my picture taking.  As long as they aren’t weirded out by it, I’ll take snaps of my dinner.

Question: My last couple of posts have been sort of picture heavy.  Is everyone cool with that?  Would you like to see more slice of life pics of Scott and I?  Or just more pics of the food?