Warning: Parameter 2 to WPE\Site_Preview::the_posts() expected to be a reference, value given in /home/customer/www/foodembrace.com/public_html/wp-includes/class-wp-hook.php on line 303
 January 5th, 2009 | Food Embrace

Hi guys!  Wow but today got away from me and I don’t even really know what I was doing. :p 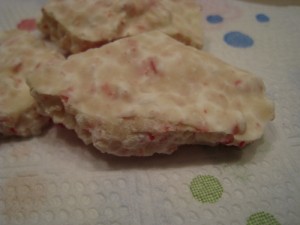 Last night we plopped down on the couch with a glass of white.  Some of the wine that I used in the seafood dish.  And let me say that, ew!  It was so nasty.  I dunno what happened!  It was fine in the dish but to drink straight up it was icky.  Yuck.  I actually felt a little ripped off that my holiday was getting cut short before I wanted it too!  We couldn’t open another bottle because I knew we wouldn’t finish it and I wasn’t going to let wine go to waste sitting in the fridge.  My last day of vacation and no wine, how depressing.

Anyway, we sat down and saw that Discovery was showing back to back episodes of Planet Earth and we totally got sucked in!  While watching I started getting major garlic burps from the seafood.  TMI?  You’ll live.

So I had a piece of my peppermint bark to help clear the garlic and make my breath more vampire friendly.  It worked!  And then I stayed up too late watching Planet Earth, I hit the hay around 11:15 or so.

And then I slept too long!  I got up around 8am.  Today is my day off from morning exercise so I was taking my time in the kitchen.  I took care of Rocks and decided to get the first day back started off on the right foot. 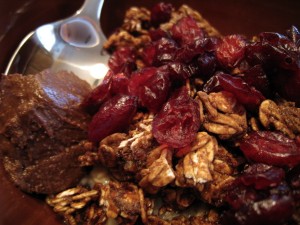 And my mix-ins were cranberries, chocolate granola, and a spoonful of dark chocolate PB. 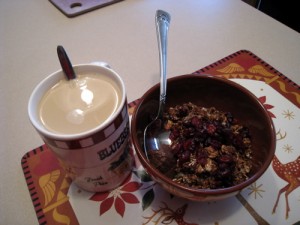 Had that along with coffee + creamer.  Just plain coffee, have to portion out the peppermint coffee now that it’s post holidays.  The peppermint creamer is already gone from the grocery store.

Boo.  I love that stuff!  Oats were awesome this morning and hit the spot.

I did a little bit of work, made phonecalls, and mostly did laundry.  Then I took Rocky out for his walk.  I have to tell you, it seems so weird now not thinking in terms of miles and points!

I started and then remembered that I didn’t need to anymore.

After the walk I made us some lunch. 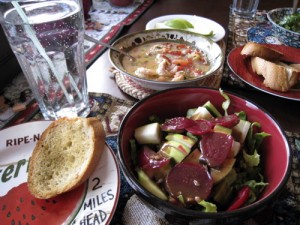 Lunch was a salad:

Dressed with a balsamic honey dressing.  Now normally I just eyeball everything but I did quick measurments today since you guys were asking about it:

I mix the first three ingredients and get them blended, then I add the S&P and oil.  I do all this with a fork.  So easy and yummy!  We like ours tart but you can always add more honey and less vinegar if you like.

This was for two small salads.

In the middle is leftover seafood dinner and the rest of the green apple.  I ate all of my salad and 2 shrimps.  And all of the apple in the middle.  I also ate all of my bread with some sauce and tomatoes.  Then 1/2 a slice of Scott’s bread.  Totally crazy lunch!  I was full and satisfied.  Not stuffed, over full, or bloated so I feel good about it.

After lunch was more laundry and a bit of work.  And then getting a new recipe up which took me some time.  Eventually it was time for me to get started making dinner.  Tonight was stuffed peppers and I was pretty excited about it! 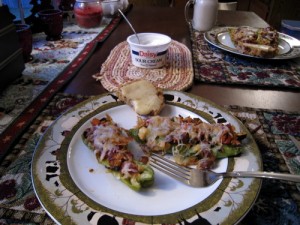 These are stuffed cubanelles.  Inside is:

All seasoned and then stuffed in the peppers and baked.  Topped with a bit of cheese.  I had two wee ones with some sour cream on top.  Just a dab and yes that is full fat sour cream. I don’t really do “light” or “reduced fat” stuff because there is usually more sugar or artificial sweetners added to make up for the loss of fat.  I would rather have full fat in a smaller amount than a big portion of “low fat” with added sweetners.

There is also the other 1/2 of my slice of beer bread from breakfast yesterday but I didn’t eat it.  The peppers were enough and so yummy.  Scott had 2 huge ones and went back for another. :p

Okay guys, it’s time for me to get ready for SF class.  Hopefully we won’t be out too late tonight.  See you guys tomorrow!

P.S. I totally set Superstars of Dance to tape tonight.  It’s on NBC and starts at 8pm.  I don’t normally do reality shows (ick) but I couldn’t pass this one up.  Anyone else watching?