Warning: Parameter 2 to WPE\Site_Preview::the_posts() expected to be a reference, value given in /home/customer/www/foodembrace.com/public_html/wp-includes/class-wp-hook.php on line 303
 January 30th, 2009: Breakfast and lunch | Food Embrace

I did end up having a lil snacky-poo last night. 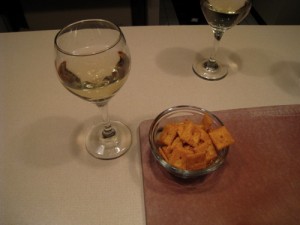 I was still wanting some carbs so with my 2nd wee glass of wine, I had some spicy Cheez-Its.  Yum!  We watched House Hunters, a show that I love and also secretly love cursing at the people because they say some of the dumbest things! “Oh, I don’t like the furniture in this room.”  Um, it’s not your furniture so you won’t be living with it.  Look at the room not the furniture.  Scott and I actually created a House Hunters Drinking Game™.  I’ll have to post it some day.

At 10pm I was wiped out and headed up to bed.  Thoughts of reading for a bit entered my mind but then I realized that since I was falling asleep while brushing my teeth, that maybe I should just call it a night. 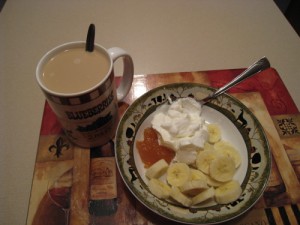 Since I wasn’t running this morning, I decided to try and sleep in as much as I could.  Rocky gave me till 7am and then he was bugging to get moving.  I looked out the window and it looked like our driveway and the streets were covered with snow.  Shaking my head to clear out the cobwebs, I headed downstairs.  When I opened the curtains to the sliding glass door, I realized it wasn’t sleepy cobwebs, we did get more snow.  Meh.  Not much but enough that everything is covered over.

I had my new fave combo for breakfast this morning, 2% fage with some apricot preserves!  And a sliced banana as well but the banana was a little overripe and sort of icky.  Along with coffee and creamer.

I checked mail and read some blogs.  Then I did some bloggy work.  I did a little more bloggy work after waking Scott up and then it was time to clean the house.  The sun is shining today and it’s so pretty outside!  I had to go around and open all the blinds and curtains to let the sunlight in.  I missed you sun!

After cleaning it was time to make some lunch.  I had no idea what I wanted but I was starving so I had to decide quick. 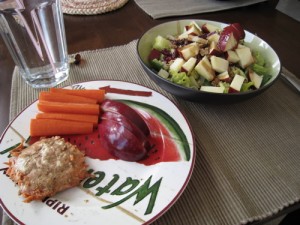 Um, yeah, it’s the salad I’ve been having. This is day three.  Fave salad is:

Topped with maple balsamic dressing.  On the side is leftover salmon from last night, some carrots, and left over apple for the salad.  YUM!

Now I must get moving because I have to meet someone soon and run some errands!  Catch you all later.