Warning: Parameter 2 to WPE\Site_Preview::the_posts() expected to be a reference, value given in /home/customer/www/foodembrace.com/public_html/wp-includes/class-wp-hook.php on line 303
 January 24th, 2009: Dinner | Food Embrace

Hi guys!  Sorry this didn’t get posted last night but I seriously just needed to chill on the couch with my boys.  Yesterday seemed like it involved a lot of stuff but looking back it looks like we didn’t do much! :p

We got a new buffet that friends of ours were giving away.  It’s very nice and now we’ll be able to donate or sell the one we have that belonged to Scott’s grandparents.  That dining set is nice but not really our style.

I also made it to the running store to pick up my race packet and number!  Hooray!!  And then it was evening and Scott and I just chilled it for the rest of the night.  I didn’t even cook, thank you leftovers! 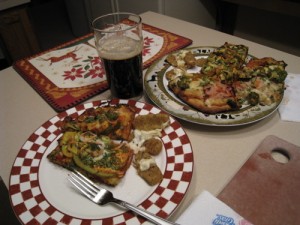 We had veggie pizza I reheated and also heated up some moz sticks.  We also split a honey porter which is a fantastic beer!  On my plate are two slices of pizza and three moz sticks.  I ate all of the pizza and only two moz sticks.

Then later as Scott and I were watching TV, we split another honey porter.  Actually most of it went to Scott and I only had a few sips here and there.  We watched the premiere of BSG.  Meh.  I was bored.  I sort of have the feeling I’m going to be the same way when I watch the premiere of Lost.

Around 9:30, I headed upstairs to read and read for about an hour.  By 10:30 I was passing out and so ready for an awesome sleep.