Hi guys!  Did I scare you all with my crabby post?

I went to be at 9:30 last night.  I was so tired and passing out on the couch.  I tried reading but the words were all blurry and moving around.  I took that as a sign I needed some sleep.  Rocky woke up in the middle of the night needing to go out. That was at 3am.  It took me a while to go back to sleep then he was up again at 7:30.  I was exhausted.  For me to feel any sort of refreshed I need uninterrupted sleep.  Choppy sleep makes me feel so much worse.  I took care of him and then debated on whether or not to stay up.  I finally realized that I was mentally and physically spent and needed more rest.  MT was out, I had no energy for that class today.  I went back to bed and got up for good at 9:30.  Still felt crappy but at least with slightly more sleep under my belt. 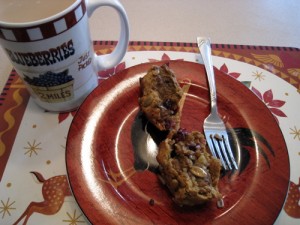 I had coffee and munched on a WW pumpkin muffin while sitting on the couch reading.  It wasn’t long before Scott got up and we chit-chatted for a bit.  Then I moved to making some lunch. 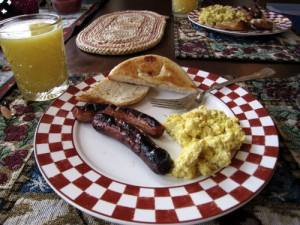 Breakfast for lunch!  1/2 an asiago bagel, 2 chicken apple breakfast sausages, and some scrambled eggs.  Plus a mimfauxsa (orange juice + club soda)!  The sausage was just okay, probably wouldn’t get it again.  After lunch I had to do some quick things around the house and then we had to run an errand quick.

Before heading out for the errand, I had the other 1/2 of the spooky s’mores bar because I was a little hungry.  Now we’re back and doing a few more things around the house before heading back out for yet another errand.  Exciting day, I know!  See you guys later.