Hi guys!  I made some tea last night and wanted something sort of sweet to go wtih it.  Then I remembered we had some gingerbread in the freezer so I pulled that out. 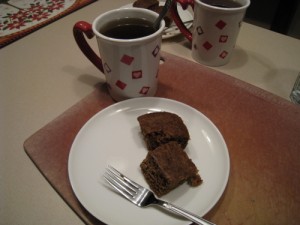 Peppermint tea and two small pieces of gingerbread.  We watched the first period of the Pens game from Friday.  I ate all of my gingerbread and then had another 1/2 of one of Scott’s pieces.  I was hungry apparently.  It was good but didn’t leave me feeling full or satisfied.  Hello empty calories!  It’s gone so I don’t have to worry about it anymore.  And I’ll stick with baked goods made with WW flour (or try to!) from now on.

At 9:30 I headed up to bed.  I’m reading book 8 in the No. 1 Ladies Detective Agency series.  I read for a little bit because by 10:15 I was calling lights out.  I was exhausted!  I slept like a rock too.  Only got up once in the night and tripped over the laundry basket because I was stumbling around. :p  I woke up 2 minutes before my alarm went off and wishing I could get some more sleep.  But I got up, I have things to do today!

Came downstairs to find that Scott didn’t change the automatic timer on the coffee pot which meant the coffee wasn’t brewed yet.  Booo!  I started it and took care of Rocks.  It was cold outside this morning when I took Rocky out.  Brr!  I thought we were clear of this single digit nonsense. 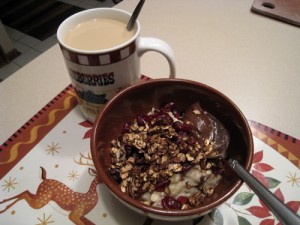 When I came back inside I got started on some oats.  I was starving this morning thanks to my unsatisfying snack last night.  I used the old fashioned oats, so this is now my new standard mix.

Mix-ins were cranberries and dark chocolate PB, keeping it simple today.  Along with coffee, it was ready by the time my oats were done.

I did some bloggy stuff, checked emails. read some blogs and then it was time to get Scott up.  I changed into running clothes and was out the door.

Ooo it was cold!  Everything was covered over in frost.  Within the first few minutes of my run I got an awful sort of cramp/pain on my left side right above the hip bone.  This happened when I ran on Sunday as well.  When it happened then, I took a short walk break, focused on my breathing, raised my arms over my head and stretched it out.  That worked and I was back to running again.  Today that didn’t work.  Grrr!  I wasn’t not going to run so I pushed through.  “Tough shit!” I said to myself and eventually my stubborness won out and the pain submitted like a punk.  Yeah!  I have no idea what that is all about though, I’ll have to see if it happens again tomorrow. 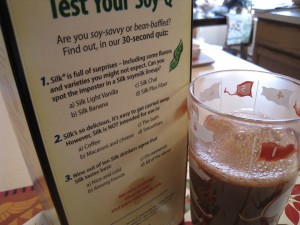 My gloves and eyelashes frosted over!  I had to clear my eyes every so often. :p  I busted out 4.5 miles and was pleased as punch.  I came home, downed the CS, and headed upstairs for some yoga.  Mmmm this is the best stretch session ever for after a run (Gentle Hatha 1 20 min) then I hopped in the shower.  It was so steamy hot!  Amazing! 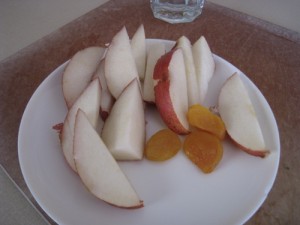 After my showered I headed downstairs for a snacky.  I had a pear and three apricots.  I only had one of those though and all of the pear.  I did some bloggy stuff and talked with Scott about what our plans for dinner should be (yes I am already thinking ahead!).  I brought it up because we had Chinese food during the election and I thought it might be fitting to have some tonight as we watch the Inaugauration (that we taped).  I’m flip flopping on it because I’m not sure if I want to spend the money on take-out.  I know we’re going out to a dinner soon (but we do have a gift card to help with the cost) and we were just at Panaera last week.  It probably shouldn’t be such a big deal but deciding to get something out is such a major decision for me! :p

Anyway, then it was time for me to make lunch!  Oh lunch how I’ve been dreaming of you since last night. 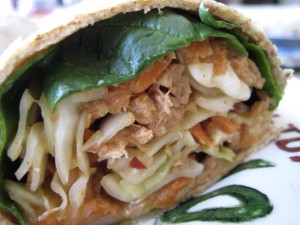 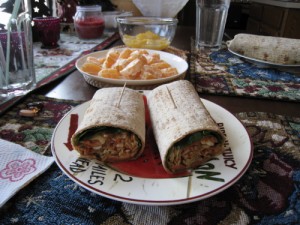 I made a wrap!  I took the sweet and spicy coleslaw from last night and mixed it with some sweet and spicy tuna.  I pulled out the wrap, added a bit of spinach and then the tuna mix.  So good!  It totally met the requirements I had for it in my head.  I used a flatout multigrain wrap.  We used to get these all the time when we lived in NC and then I sort of forgot about them.  Then my store didn’t carry them but now they have some!  Hooray!  In the middle were some clems.  Lunch was awesome!

Okay guys, now I’m off to get my legs defuzzed then hit up WF!  Catch you later!