Hi guys!  I woke up last night around 5am for a potty run and I heard a snow plow outside.  Hrm.  I don’t remember any call for snow.  I really didn’t think much of it.  Maybe it was a prevenitive measure for some upcoming snow or ice.  I fell back asleep and got up for good around 7am.  Looked outside and oh my!  More snow!  Like another 3 inches or so. :o  It was still snowing too when I got up.  Awesome! 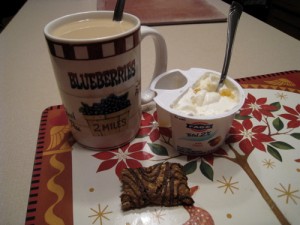 I got Rocky taken care of and then fixed myself something to eat because I was starving.  I had morning coffee and a peach fage.  In the pic is also half a spooky s’mores Z bar but I ended up not eating it. I just had the coffee and fage.  If you can find the peach fage I recommend trying it.  It’s awesome and totally filling.

Around 8am it was snowing even harder, nice big fluffy flakes and I couldn’t take it anymore being inside.  I quickly changed into running clothes and headed outside.  The weather was amazing!  Not too cold although my nose kept dripping like crazy.  The snow was a little slick even with my yaktraxs on but nothing I couldn’t handle.  It actually gave me more of a glute workout which is fine with me!  I ran on the road as it was a little more compact.

One gentleman was out shoveling his walk and I greeted him.  He said it was a beautiful day for a run and silly me didn’t realize he was being sarcastic.  Because to me it was a beautiful day for a run!  “Yes it is! I love running in the snow!” I said.  And then he replied something about being crazy.  I didn’t hear it all because I was running and was past him by this point.  But I thought, how is this crazy?  Plenty of people do things in the snow and winter.  No one thinks twice about sledding, skiing, snowshoeing, or even hiking.  So why should running be any different?  It’s just another activity and the awesome thing about running is that you can do it all year long!

So no Mister, I’m not crazy thank you! 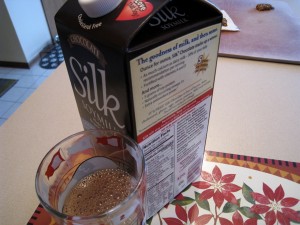 I did 4.5 miles and it took me a few minutes longer today because of the snow but that’s okay.  My HR was up most of the time and I burned a heck of a lot more cals.  Go me!

I decided to wait on Rocky’s walk so we could go with Scott later.  I changed and did my yoga stretch.  Oh I love it.  It’s the perfect combo for after a run because it stretchs all the right areas.  And I feel so much more relaxed and at peace.  Ahhh.

After stretching I did some bloggy stuff and then I headed into the kitchen to get started on getting Sunday breakfast put together.  I put some breakfast chicken sausages in the oven to heat and pulled out some pancakes from the freezer.  I put away the clean dishes from the dishwasher and washed the dirty ones in the sink.  Then it was time for something new! 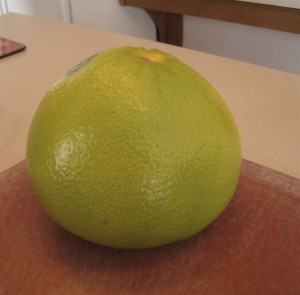 I bougth this at the store yesterday, a melongold.  I had no idea what it was because sadly my store does not provide information on their produce.  Either you know it or you don’t.  It was on sale so I picked it up.  My research today told me it was a grapefruit hybrid and supposed to be sweeter than traditional grapefruits.  I do not like grapefruit.  I love tart things and will eat lemons or limes straight.  However a greapfruit is not tart to me but very very bitter.  It sits on my tongue funny and I get a little gaggy with it.  I tried a slice of the melongold straight and it was okay but still had that bitter aftertaste.  I put some aside for Scott to try plain because he loves grapefruit and I figured he would like this.  The rest I mixed with a little bit of sugar and added an orange and let it hang out for a bit.

Scott got up and had good timing because I was starving at this point!  I had to eat before showering because I couldn’t wait much longer. 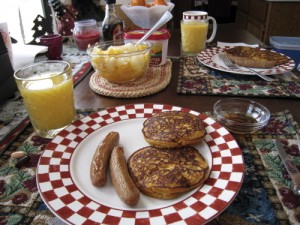 On my plate are two sausages and two pancakes with the fruit in the middle.  I dipped my pancakes and sausages in maple syrup.  YUM!  I cleaned my plate.  Then snagged a few bites of sausage off of Scott’s plate. :p  I mostly picked out the orange slices.  I tried some of the other and it was okay but still a little too bitter for my tastebuds.  But if you like grapefruit give this a try, you might love it!

After eating I ran up and took a loverly long shower.  Now it’s off to brave the cold again and take Rocky for a walk.  The temp is high enough that he can be out for a walk now (still with jacket and booties of course!) and I know he’s dying to get outside and stretch his legs.  See you guys later!