Hi guys!  I did a little more organizing and then my stomach started doing flip-flops.  Apparently it didn’t like lunch too much and let me know it.  Ew.  I had some peppermint tea to help calm it back down. 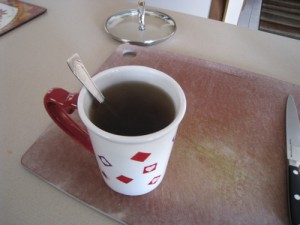 Either it was the tea or it happened on its own but my stomach decided to chill out.  After some worky stuff I called it a day.  Time for the weekend!  I cut Scott’s hair and then came downstairs to start dinner and get it going in the oven.  I was starving and ate some raisins.  No picture because I was too busy hunched over the container inhaling them.  But we all know what raisins look like.

After Scott showered, I put out a little snacky for us because we were both hungry.  I had been craving cheese all day!  Stupid PMS. 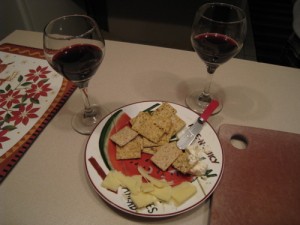 On the plate are some Kashi crackers, a LC light french onion, and some slices of white cheddar.  I had about 4 kashis with LC and a few pieces of cheddar.  I break those up into smaller pieces after I cut a slice, makes it more easier to pick and nibble.  I probably had four small slices of that.  Along with a small glass of red. 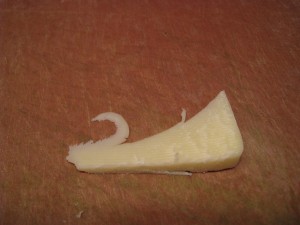 Check out this piece of cheese I cut, doesn’t it look like a swan? 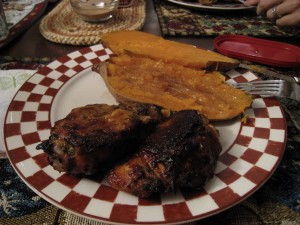 I used this pic b/c I can see Scott's wedding band. Aww

Dinner was chicken thighs and baked sweet potato.  There are two thighs on my plate but I only had one and half the sweet potato.  It had a smidge of butter and cinnamon sugar on top.  Very yummy!  There quite possibly could be a snack in my future as I’m very snacky.

I officially signed up for my first 5K today!  It’s in two weeks, last day of January.  Woo!

And this will be something I can then cross off my list of 2009 goals!  Now I’ll have to make sure to pay more attention to my pace when out on my runs.  YaY first race!