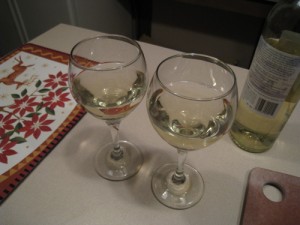 Happy Friday guys!  Scott and I finished the Pens game from Tuesday and they won!  Hooray!  They haven’t won a game in ages it seems like.  We had a glass of white while finishing the game. It was just okay.  No snack for me because I was too tired and passing out on the couch.  It was all I could do to finish the Twilight Zone episode we started.

I decided to let myself sleep in a bit today since it was supposed to be super duper cold.  Well, I ended up waking up at 6am and laid in bed for a bit till 6:30.  I got Rocky all bundled up and taken care of and when I checked the temp it was -12F out.  Holy crap that’s cold!  The deck popped so loud when I walked on it this morning.  It was popping last night too as the temp kept dropping. 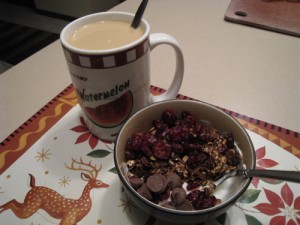 No banana means no oats this morning and I definitely could have used a big bowl too!  Instead I had 2% fage with homemade chocolate granola, cranberries, and a few chocolate chips thrown in since it’s Friday.  I added a wee bit of peppermint extract too since I was having peppermint coffee.  Hooray for peppermint coffee!

I diligently kept checking the temp every so often to see if I would make it out for a run and it was still in the negatives.  I got Scott up and then started Mission: Clean-UP since I couldn’t go out!  Laundry got started (all of Rocky’s blankets and bed stuffs) and I then cleaned the house from top to bottom.

After that was all done I sat down for a quick snack since I was a tad hungry.  New combo! 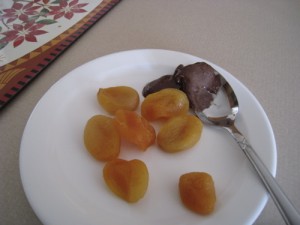 Dried apricots + dark chocolate PB = pure awesomeness.  It was so good!  I even shared and gave Scott a few bites.  I did some more organizing stuffs and then it was time to make lunch. 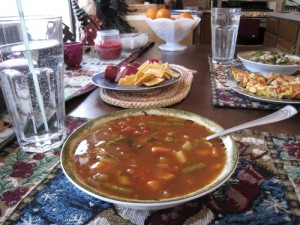 I didn’t want anything heavy and wanted a ton of veggies. A salad was out because it’s freezing cold and I just couldn’t bear to eat something cold.  Instead I heated up some veggie soup.  In the middle is a red delicious and some kashi cheddar crackers to dip in the soup.  I had a few bites here and there of the soup, it wasn’t quite satisfying or what I was looking for.  I ate all of the apple and only a few crackers because those weren’t cutting it either.  Scott had leftovers (fritatta and kale soup), neither of which appealed to me either.  Hrm.  Another snack might be in my future.

What’s in my future right now is going through boxes, closets, and the basement to pull out things we don’t need/use anymore so I can get rid of them.