Hello bloggies!  I’m working off of the newest version of WordPress so bear with me while I get used to it.

Scott and I finished the Pens game from Saturday and they lost. Again.  Dang but they are playing so poorly.  Then we watched two Family Guy episodes and then I headed up to bed to read.  I didn’t get very far because I was wiped out.  Lights out by 10:30. 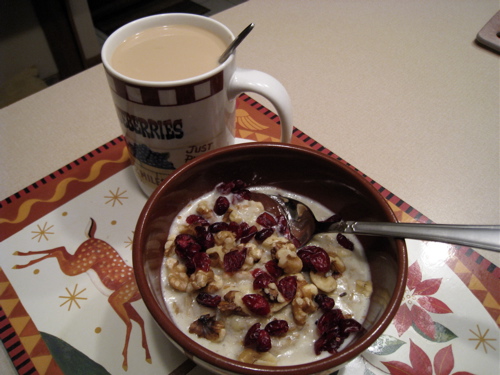 I am almost out of quick oats and there wasn’t enough for a pot so I switched to old fashioned oats and tried those out.  I am using them from now on!  The oats are bigger and way more chewy providing great texture and keeps me interested.  I kept it simple with mix-ins this morning, cranberries, walnuts, and a spoon of dark chocolate PB.

Along with coffee and creamer, which again was awesome. Scott is knocking the coffee out of the park this week.  I read blogs and email this morning while eating breakfast. 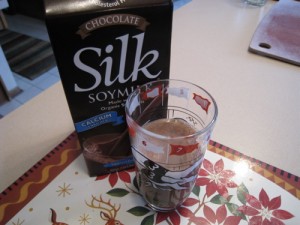 Eventually it was time for me to get Scott up and get dressed for my run.  The snow had changed into something of a cross between snow and frozen rain.  It was hard and very tiny so it pelted me during the run.  Nothing I couldn’t handle though.

I was lucky again in that there were no construction guys!  Woot!  I did my normal 3.5 loop with an extra thrown in bumping me up to 4 something.  I’ll have to drive it to see for sure what the distance is.

I did yoga after my run.  I am very much loving this routine.  Twenty minutes is perfect for after a run.  All the muscles are getting stretched including my hips and I’m very relaxed when it’s over.  I showered after yoga and ran out of hot water!  Doh!  I hate that. 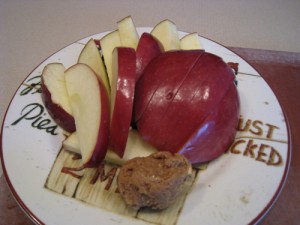 For whatever reason I was starving after my run and it was hours from lunch.  I knew I had to eat something so I sliced up a red delicous with a scoop of PB.  I alternated dipping the slices, one with, one without.  I have not had apple + PB in such a long time!  I forgot how good that combo is. :p

I did some work things and some more stuff around the house.  It was finally time to get started on lunch.  I wanted something light but not sure exactly what.  With the weather turning to crap, the temps majorly dropped and the wind picked up making it miserable outside, I wanted something warm and comforting.  I decided on soup once I saw a package of mini wontons in the freezer. 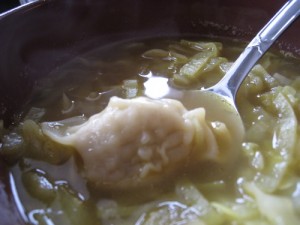 I sauteed up some very thinly sliced onion and cabbage.  Seasoned with soy sauce, curry powder, garlic powder and red chili flakes.  Chicken broth base and the wontons added at the end.

Yummy!  I was going to add more veggies but since I know for sure we are having veggie chili tonight for dinner, I’ll get more veggies in then. 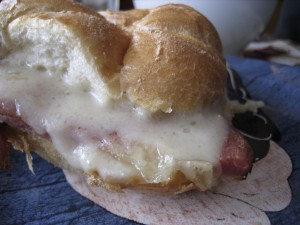 Scott also had a warm ham and swiss sandwich that I had two bites of because I could not resist that cheese!

After lunch I walked Rocky in the crazy cold weather.  We only did a short one because the wind made it too nasty outside.

Now I’m off to fiddle in the kitchen and work on some recipes.