Warning: Parameter 2 to WPE\Site_Preview::the_posts() expected to be a reference, value given in /home/customer/www/foodembrace.com/public_html/wp-includes/class-wp-hook.php on line 303
 January 12th, 2009: Breakfast and Lunch | Food Embrace

Hi guys!  Last night after I posted I bundled Rocky and myself up and we were out the door with Scott for a walk.  I opened the door to find everything covered in snow!  Huh?!  It was weird because it was snowing pretty heavily and steady but the snow was very fine and you couldn’t see it unless you were actually out in it.  It was an amazing walk!  Cold and snowing but not a nasty bitter cold.  The snow was the kind that is very pretty and sparkles on the ground.  No one was out but us so it was very quiet and peaceful.  Ahh.

As far as I know it snowed for a while last night.  Scott and I watched the first two periods of the Pens game from Saturday and by 10pm I called it quits and headed up to bed to finish my book.  I was reading Brisingr which was just so so bad.  I could not wait for it to be over with.  CamTim, I have the second book of Twilight that I will start reading after a few other books.  There’s only so much Edward and Bella I can take before wanting to scratch my eyes out. :p  My next book, I’m going to reread book 7 of The No. 1 Ladies Detective Agency because I just got book 8 for Christmas.  Eight, I will start reading after I finish 7.  I have the trade paperback versions so I’m slightly behind in the series.

By 10:30 I finished my book and was just chilling in bed while Scott folded sheets (his chore, I wash ’em he folds ’em.  Mostly because I have no patience for folding sheets.).  Then I snuggled with him and Rocky for a minute and then I finally decided to call lights out.  I set my alarm for 6:15 and was out like a light.

I woke up before my alarm and laid there for about five minutes and then I finally got out of bed.  I saw snow when I came downstairs.  And it was more than a coating or dusting.  Like I might have to put on my Yaktraxs sort of snow.  When I took Rocky out for his potty run, it was snowing again!  Whee!  This is what happens when the weather reports don’t call for snow, we finally get some! 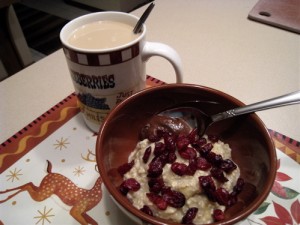 I was hungry so I tried making oats for one this morning (Scott already stated last night he was having yogurt this morning).  It came out well!

And my mix-ins were just some cranberries and dark chocolate PB.  YUM!  And hit the spot.  Along with coffee + creamer which was amazingly hot this morning.  I loved it!

I read some blogs and checked email while I ate.  Then it was time to get Scott up and change into my running clothes.  He is easing into getting up earlier and earlier. :p  I changed and then spent a bit of time putting on my Yaktrax.  I got ready to head outside only to see that my road was clear.  Okay, took the Yaktrax back off since I didn’t need them.  I headed out and ran on the road.  Once I turned off my road I saw that it was only my road that was clear, the others still had snow on them!  But it was okay because the snow was very light and fluffy.  The kind you can just brush away with a broom and we maybe only had 1.5 inches or so.  However, it provided a good bit of resistence training and by the end of my run my thighs were feeling it!  It’s because as you take off to land on the other foot, pushing off the ground since it’s snow, there is a slight slip before you accelerate and make it to the next foot.  I don’t know if that makes any sense but I did my best.  That slight slip forces you to have better balance and to try to be more stable and have a better grip on the road.  Working the calves and thighs, at least for me. 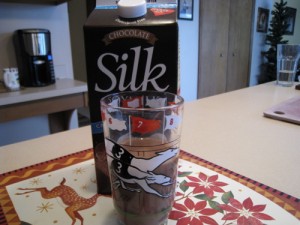 I was able to run my normal route today because there were no construction guys!

I also added on an extra loop which I’m trying to make my “normal” run so I can start building up my distance.  I should have ended up somewhere a little over 4 miles today.  It was an amazing run.  I love running in the snow so much.  It’s much more peaceful and calm.  The weather was amazing today not too cold at all and I had my jacket unzipped most of the time.

After my run I did my yoga stretches which also felt awesome.  And then I showered.  After my shower I did some work stuff and knocked off some items on my to-do list.  Then it was time to make lunch.  The thing about eating early in the morning is that I’m very much ready for lunch by 11am.

But I held out till closer to noon. 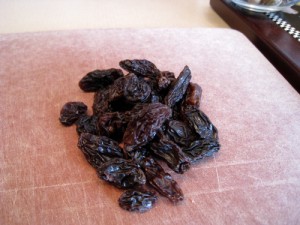 While I got lunch prepped, I snacked on a handful of raisins.  They always do the trick of curbing my hunger till I can sit down to eat.  They don’t take it away fully but they take the edge off. 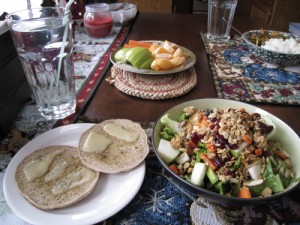 Lunch super yummy!  I had a medium-ish salad:

Topped with some balsamic honey dressing.  On the side is a quickie cheesy garlic bread.  I took a sandwich thin and lightly brushed it with some olive oil on both sides.  On one side I sprinkled it with garlic powder, Ms. Dash Italian blend, and topped it with some small pieces of cheddar.  Put it in the toaster oven for a few minutes to toast up and melt the cheese.  In the middle are carrots, apples, clems.

This was my first try with the granola on the salad and it was awesome!  I think I might start doing this from now on.  It provided great crunch and texture without influencing the taste too much.  My garlic bread was very yummy!  I only ate 1 slice though, the other I gave to Scott who also loved it. :p  I only had a few clem pieces because my salad filled me up so much.

After lunch and cleanup I took Rocky for a quick walk and both of us were excited to be out in the snow!  Once home I did some more stuff off my to-do list and put a dent in the laundry pile.

Still working on things so I can make this a very productive Monday!