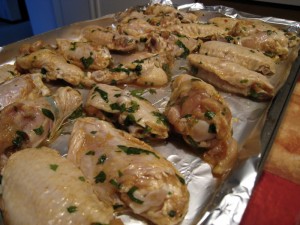 Ready for the oven

Alright the first recipe of 2009!  Woo!  I would have had this up sooner but there were technical difficulties to be dealt with but everything is peachy now.

How are we all doing post-holiday?  We’re doing pretty darn good over here at the HQ.  Snackies were indulged in but not embarrassingly so.  Or at least I think so, it was the holidays and wine was involved which means it’s possible I’m forgetting something.  My big question is, do we have room for more snacks?

Excellent my friends.  Here’s the deal, because my site was still new around the holidays my theme related stuff was just not happening.  One of my 2009 goals is to be more on the ball and make sure that doesn’t happen again.  Yes the holidays are over but there is still one more big thing that people usually get together for so they can party, eat, drink, and yell obscenities.  It’s just like Christmas really.

Naturally I’m referring to the Superbowl!  I will be honest and tell you that we do not watch the Superbowl, not even the commercials.  However, pretty much everyone else does and because I will jump through fire to get a chance to make snacks and party foods, I thought this would be a good chance to post some of our favorite party pleasing recipes.  Things that are simple to make and simple to serve.  By simple to serve, I mean they are easy to keep warm or can be served room temperature.

First up is wings!  Wings are a pretty standard party fare, yes?  I did not used to be a wing person.  Too much work.  But then I hit college where funds were tight and 10-cent wing night ruled.  Oh yes back when Scott and I were in college, it was 10-cent wings.  Or if you were really lucky, 5-cent wing night.  None of this 25-cent bidness.  We loved wing night!

But now that we are old farts who would rather stay home and not ingest cheap beer and deep fried chicken, I’ve taken to making wings myself.  And the amazing thing about making them yourself is that you can make them any flavor you want.  I’ve experimented plenty and we are particularly fond of ones that sit in a marinade for a while.

Place the wings in a plastic storage bag.  In a small bowl, mix all other ingredients to make the marinade.  Then pour mixture over the wings in the bag.  Seal the bag and massage the wings, moving the marinade all around the wings.  Place sealed bag in a large casserole dish so the wings are laying flat.  Place in refrigerator and allow to sit for several hours.  About 6-8.  Flip the wings over at the half way mark.

Half an hour before you plan on cooking them, remove from fridge and allow to sit out so the chill comes off and they start to come to room temp.  Preheat oven to 400 degrees.

When the oven is ready, line a cookie or baking sheet with foil and spray with nonstick spray.  Or brush a little oil over the foil to help keep the wings from sticking.  Place the wings on the baking sheet in a single layer.  Place in oven and bake for about 15 minutes, flipping once.   Serve and enjoy! 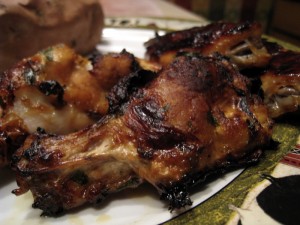 What I learned by starting to make my own wings is that wings don’t have to be bad for you.  When we hear “wings” some of us cringe and think “Oh what an awful junky food.”  But it doesn’t have to be that way.  Baking the wings instead of frying them is loads better.  Marinating provides tons of flavor without having to coat them in breadcrumbs and then toss them in a bunch of sauce.  Yes there is still chicken fat on the wing but no one says you have to eat it.  I pick it off.  I like having the fat on there as it provides more flavor and keeps the chicken from drying out as it cooks, but that’s as far as my love goes.  When it comes time to eat, I pick the fat off and plug away at my lil’ wing.

Wings are a great party food and for good reason, as they can be served warm or at room temperature.  You could even jazz these up a little more by adding some lime juice and lime zest to the marinade.  Sprinkle with some toasted sesame seeds before serving.

We have fallen in love with wing night all over again.  Healthier wings, good beer, and no lines for the bathroom. Give these a try and I bet no one will even miss the sauce!

Have fun guys!  And remember always play with your food!