Hi guys! Today was my last day of PT.

Booo! I am going to buy some weights so that I can continue to do stuff at home because I don’t want to lose what tone and strength I’ve already developed. I hope to get back to PT after the new year and once I get my schedule more figured out and once we have a more definite budget in place.

After class we headed straight back home, no stopping at the grocery store. That was okay by me because I was cold and tired. It was so bitter cold outside I didn’t want to be out in it much longer. Once home for a bit I changed and putzed around trying to get warm. All I could think about was lunch and soup! I decided that soup would be a much better reward if I took Rocky out for his walk and got that done. I got us both all bundled up and we were out the door. It was still really cold but thankfully no wind which made the cold easier to handle. I just did a shortie 1.0 mile walk with him and then we were back home.

I don’t know how I’m going to handle my run tomorrow, I guess just take it really slow and easy. A lot of the snow became really slippery, especially in the places where people shoveled. And it’s supposed to rain tomorrow but it’s also going to be cold which will make for a messy run I think. Good times. I guess my motivation and determination will be tested. :p 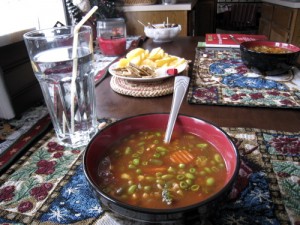 Finally it was time to eat! And I wanted to load up on veggies. I opened a can of low sodium veggie barley soup and added in:

YUM!! The soup was perfect! On the side was 2 peeled oranges and a LC light wedge with some kashi veggie crackers. I went in for a slice of bread with butter but after two bites realized I didn’t want it. I had most of my soup which was a gigantic bowl! I was hungry! :p And 1 orange and about 6 of the crackers with cheese, Scott had the rest.

After lunch and cleanup, no lie, I headed up to bed and read. It was so decadent to just be laying in bed reading. I very much needed that downtime. The electric blanket was on and Rocks was snug next to me, and I just chilled. I started reading Twilight which I picked up ages ago before I even knew it was going to be a movie or anything about it other than it involved vampires. So far it’s okay but I hope Bella isn’t as angsty or a stammering fool the whole book because that’s going to get old quick.

Eventually I headed down to start dinner. I was roasting some chicken breasts which makes everything easier because I can just toss a whole bunch of veggies in with them and call it a day! 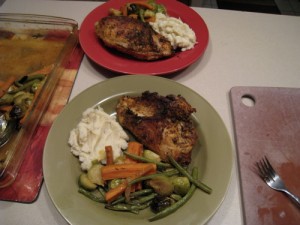 We had the chicken with carrots, green beans, and brussel sprouts. I also made some mashed potatoes and gravy because it was that kind of day. I only ate half the chicken and a few brussel sprouts, I ended up not liking those too much. They needed more pizazz but the chicken was good! I had a wee bit of gravy on my mashed, and ate all of my carrots and green beans. Went in for four more bites of mashed with gravy, two carrots, and three green beans. Now I am pleasantly content and no longer hungry.

Tonight’s plans include more reading in bed! This is my total de-stressor, where I can just read for hours on end and just let everything melt away. If I wouldn’t have had all that wine over the weekend I would totally pour myself some red! I am already in my jammies and have been since 4pm because I repeat, I am pooped! No SF class for me tonight, I don’t think I would be able to make it through.

I am participating in the Booty Buster Challenge! You get points for activities that you participate in, like cardio, strength training, and so on. So my total for today: