Warning: Parameter 2 to WPE\Site_Preview::the_posts() expected to be a reference, value given in /home/customer/www/foodembrace.com/public_html/wp-includes/class-wp-hook.php on line 303
 December 5th, 2008: Lunch and Dinner | Food Embrace

Hi guys! I’m writing this from a fully decorated house!

I took Rocky for a walk and it was super short because it was so crazy cold outside. Brrr! Then I made us some lunch! 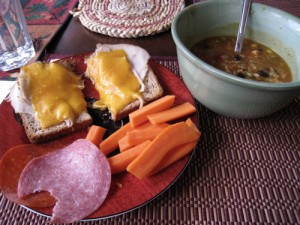 We had some low sodium chicken gumbo soup that I added a little extra broth too and the remaining leftovers of rice and beans. I also had an open face sammy on health nut bread with 1 slice of turkey and 1 slice of cheddar, tossed in the toaster oven for a quick melt. There is also one slice of salami (notice the bite missing :p ) and one slice of sandwich pepperoni. Then some carrots on the side since I’m not a complete animal.

I ate everything but the pepperoni. 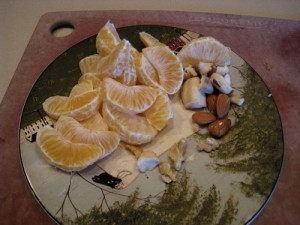 2 clemmies plus 4 almonds, 1 walnut, and 2 Brazil nuts, all of which I cracked open myself.

Then I did some more decorating and finally Scott was done with work! That meant we could hang lights and get that done. Most of it was complete and by the time Scott was working on the banisters, I decided to make some dinner. Nice and easy today. 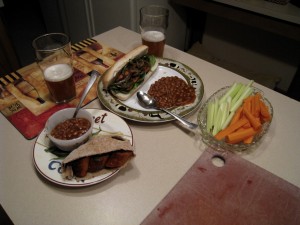 I sauteed up some onions and peppers in a little olive oil and smidge of butter. I also cooked up some buffalo chicken sausages to make sandwiches. I heated up some baked beans which I doctored with BBQ sauce, worchestershire sauce, and some buffalo sauce. On the side was chopped carrots and celery minus the dressing because we already had enough going on. On the sandwiches, along with the peppers and onions was some spinach for extra green. I had mine in 1/2 a WW pita. I ate everything except for a few bites of beans which Scott finished. I had probably 6 carrot sticks and 4 celery sticks. We split a Summer Ale (that’s right baby, in December I still have me some Summer Ale!) while we ate. Started last night’s Pens game as well.

Now I’m heading back to the game and cracking open a new beer we bought to try out. See you guys tomorrow!