Hi guys!  Last night we kicked it back finishing up the extras from the movie.  I made us a little snack. 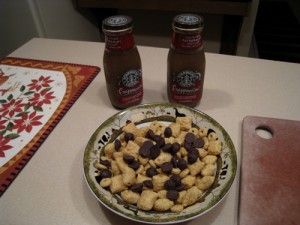 Some Peppermint Dark Chocolate fraps that I bought ages ago, and a mess of PB puffins, Kashi heart2heart, and some dark chocolate chips.  I took a few sips of the frap and wanted to spit it back out.  So gross!  It has this really nasty cough medicine aftertaste to it.  Ew, I could not drink it. 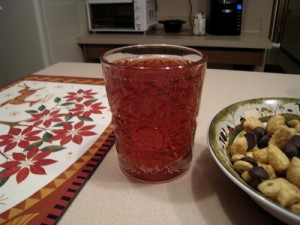 Instead I had a light cranberry fizzie.  Cranberry juice + mandarin seltzer.  Much better and I appreciated that more than the heavy frap.  So it worked out much better this way.  I thought we would be splitting the snack but Scott didn’t eat as much of it as I did.  Oops!

For some crazy reason Rocky let me sleep till 8:30 this morning. :o  The wind was killer outside.  I wasn’t sure if I was going to be able to run in it.  I decided to eat breakfast and have a chill morning while waiting to see what was going to happen. 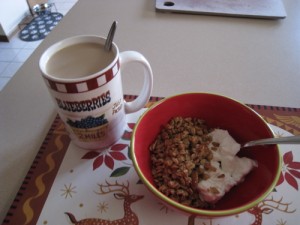 start of the day

I had coffee + creamer, with a little bit of 2% Fage and some Bear Naked banana nut.  I read a few blogs and decided to brave the wind and go running. I so needed to get out and run!  Plus I wanted to get my normal 3.5er in today because I haven’t done that run since Christmas morning! 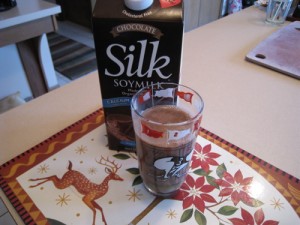 It wasn’t freezing outside, just cold enough that I needed my toboggan, 1 pair of pants, long sleeved shirt, and my hoodie.  So weird for December!  I have a feeling come February and March we are going to get hammered with winter and snow, just about when we want some spring.  That’s what happened last year.  Shoveling 4+ feet of snow was not good times. :p

It was incredibly nice being outside.  The sky was super blue with only a few clouds.  The wind was miserable though, I will not lie.  It wasn’t constant but it was enough that I wanted it to stop!  I did my 3.5 and clocked in at 40 minutes.

That’s a good time for me, normally I come in at 42+ minutes.

I slammed my CS plus a little more and then took Rocky out for his walk.  The wind seemed to have picked up so the walk wasn’t so great but we got 2 miles in.  It was after 11am when we got back home and I decided to just go up and shower.  Scott would be getting up soon anyway so I didn’t think he would mind me barging back into the bedroom.

After my shower (which wasn’t hot enough!), I dumped in a load of laundry and talked with Scott about what we should do today.  I decided lunch needed to be made. 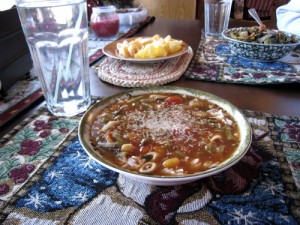 Scott had the leftover veggies from last night + the remaining rib roast + some rice.  I had veggie soup with a small amount of rice added in.  Also orange and clems in the middle.  We still don’t know what we’re doing today, but hopefully we’ll figure it out soon! :p