Hi guys!  Sorry no post last night but by the time we finally sat down on the couch it was close to 10pm. :o  And I was pooped!

Not too much happened after we got back from Rocky’s walk.  I mentioned I was munchy and Scott said he was too.  Seeing how it was going on 4pm I decided to just make some appetizers and our starter salads for dinner. 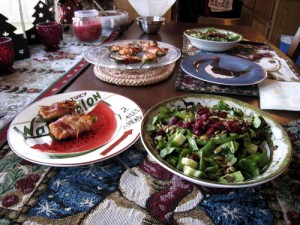 We had stuffed bacon wrapped jalapenos!  YUM! And the salads were very basic with:

Dressing easily with some oil and balsamic.  I started off with two jalapenos and ended up eating four!

To my credit I always pick the fat off the bacon because ew, fat.  And I only ate the inside of the jalapeno because the whole thing was just too spicy for me.  So that really didn’t amount to too much and I did finish all my salad!  I was craving some veg.

I was about to put the roast in when I wanted to add some wine to the pan.  We decided that would be the perfect time to bust out one of my prezzies from Scott! 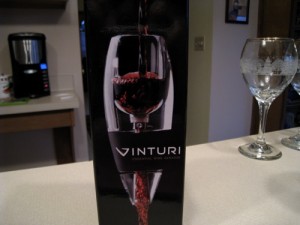 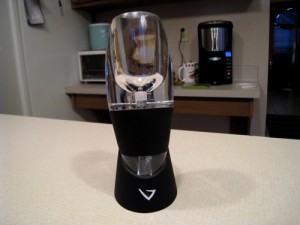 out of the box in its holder

This is a wine aerator.  For red wine you have to let them “breathe”, we all know this right?  Well this little fella, you pour the wine through him and he aerates the wine for you so you can drink it immediately.  Scott says it has gotten amazing reviews.  And that it is supposed to make a cheap bottle of wine seem like a really expensive year.  We pulled out a cheap bottle I bought for Christmas. 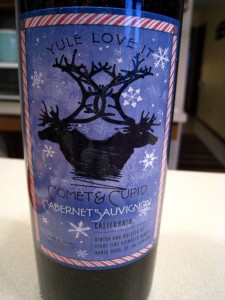 You’ll notice it has reindeer because I cannot resist seasonal items.  Let the taste test begin! 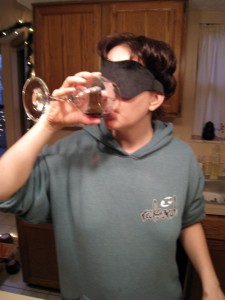 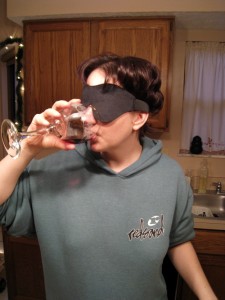 Ha! I guess I pretty much work the exact same pose as I drink wine. :p  Anyway, it worked!  The second glass was the pour through the aerator and it had a much deeper tone with a more intense flavor than just drinking it straight.  Very interesting!

I plopped dinner in the oven, Scott poured me a glass of wine and I hit the couch with my word find book (also a prezzie) for a bit while Scott talked with his parents.  Then he came in and was flipping through some of his prezzies while I kept plugging away at my word find.  I love word finds!  Crossword puzzles can kiss it, word finds are where it’s at!

Finally dinner was done and it was time to eat! 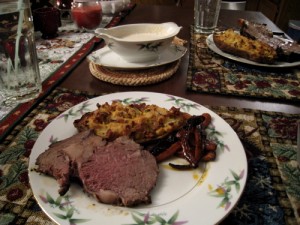 Prime rib roast with twice baked potatoes and carrots that roasted in the pan with the beef.  We were also going to have brussel sprouts but they didn’t turn out.  Scott said that was fine, more room for meat!

In the middle is horseradish cream sauce for the roast.  I ate everything on my plate and then went back in for another wee cut of roast.  It was so good!  And we only have this once a year at Christmas, so  yeah I think I can have as much as I want.

After dinner was cleanup which didn’t take too long.  Then we decided to try and take a quick picture of us but everything was coming out blurry.  So I present you with this super blurry pic of the two of us. 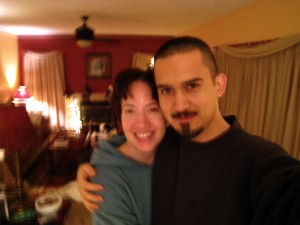 Finally we could hit the couch.  Scott poured us our last glass of wine for the evening, some of the reisling from Christmas eve and we finished the Pens game from earlier this week.  It was horrible.  Ugh!  They play tonight so let’s hope that’s better!

By 11pm I was passing out so I headed to bed.  We had a great Christmas day and I’m so glad we’re on vacation until after the new year!

I haven’t had breakfast or anything yet, that stuff will get posted later today.