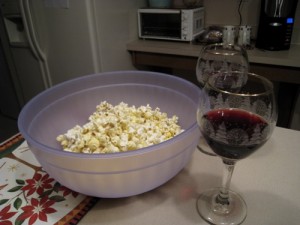 Hi guys! I put packages together and did xmas cards last night.  All of that is done and now a trip to the post office is in order.  After that, we sat on the couch and finished the Pens game from Saturday.  It was disgusting. Ugh the worst game I’ve seen for a long time.  I was so snacky!  While we watched I had some popcorn and a glass of wine.  Scott opened a bottle of red because I needed it for the soup.  I use red instead of white wine in my French onion soup. 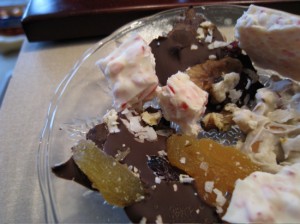 I didn’t have much popcorn, maybe a cup and a half.  It was good but wasn’t getting it.  I had another small glass of wine and then dived into the bark.  Bad news having this bark around!  I had a piece of peppermint and a piece of the dark chocolate bark.  Then had two more pieces of dark chocolate.  Salty then sweet,  PMS much?  Jeeze.

Around 10:30pm I headed up to bed to read for a bit.  I only read for about 1/2 an hour and then it was lights out.  Scott wrapped my gifts last night, or so he said he was going to as I slept.

It was a rough night last night.  The wind was still going strong keeping me awake.  And then our roof had some ice on it from the rain/snow/ice we got on Saturday evening.  Well the wind would knock the ice loose sending sheets of it sliding down the roof and then falling off to the ground.  That makes a lot of noise especially at 2 in the morning.

Rocky was all buried in his bed so he was letting me sleep in and I took advantage until 8:30am.  I finally got up because I knew I had to turn the coffee back on.  It only stays on for 2 hours then the pot automatically shuts off.  I didn’t want the coffee to get too cold so I got up.

It is cold outside!  But no wind thank goodness.  But very chilly as I was out with Rocks for his potty run.  He didn’t take too long outside this morning. :p  I was starving!  I didn’t feel like making oatmeal though, I was being lazy.  Instead I had yogurt. 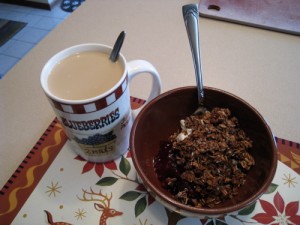 Some cranberry sauce, 2% Fage, and chocolate granola.  YUM!  With the coffee which was still hot.  Hooray!

I’ve decided Mondays are going to be my days “off” from exercising on my own.  No running or lifting or anything.  So I have plans of doing a little work to get things wrapped up before the holiday.  Hit the post office, and do some more organizing around the house.  See you all later!