Hi guys!  I’m going to try to make this quick because it’s cold in the office!  After posting I headed to the kitchen and made Sunday breakfast.  Then I put that in the oven to stay warm while I made some cranberry sauce and also cleaned up the kitchen.  It wasn’t long before Scott got up and so he helped me with the dishes.

Then I headed up for a quick shower.  It wasn’t as hot as I would have liked but it did the job well enough.

Coming back down stairs to a clean kitchen and being able to dig right into Sunday breakfast was awesome! I am so doing this from now on.  Just make it early and keep warm. 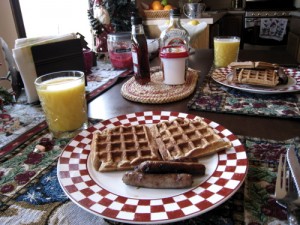 We had cranberry waffles (made with WW pastry flour) and some maple sausage on the side.  YUM!

After lunch I got busy trying to clean out this office and the office upstairs.  Ugh!  Not done but at least I made a dent.  I also sent out some invoices for work I did.  Then Scott and I took a break to brave the cold and take Rocky for a walk.  We only did a short one because the weather was crazy cold outside and the wind would not quit.  It was fierce!  When we got back I checked the temp and it was colder than when I ran earlier. :o  It was 17F RealFeel 7.  Oh my!  Tonight it is supposed to be 5F with a RealFeel of -23F.  Crikey!  That is some serious cold for this area.

Back to the office stuff when we got back home but the whole time we were talking about dinner.

Both of us were hungry and so I decided to just get started on supper.  Since it was so cold, I thought soup would be a good idea for dinner.  While that was cooking we snacked on these: 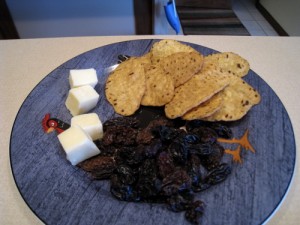 Sweet potato chips, cheddar, and some raisins.  I had three chips, 1 cheddar cube, and a few raisins (maybe 5?).  And some peach pear Italian soda.   Finally it was time for dinner! 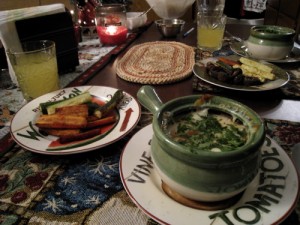 French onion soup!  The great thing about French onion soup is that it smells good the minute you start cooking it.  You can’t really beat the smell of butter and onions.  At least I don’t think so!

On the side was roasted veggies: carrots, zucchini, and for Scott, mushrooms.  Tossed in olive oil with S&P, garlic powder, and chili powder.  Roasted till tender.  The carrots went in first since they take longer and then I added the others.  I ate all my veggies but not all of the soup.

Scott’s cleaning up the kitchen and it’s time for me to wrap this up so I can get out of this cold room!  See you tomorrow!

Doh! I forgot to add in my HBBC points again!  Here they are: