Warning: Parameter 2 to WPE\Site_Preview::the_posts() expected to be a reference, value given in /home/customer/www/foodembrace.com/public_html/wp-includes/class-wp-hook.php on line 303
 December 20th, 2008: Lunch and dinner | Food Embrace

Quickie post guys because I’m ready to hang on the couch with my boys!  I’m wiped out. 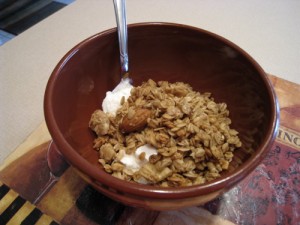 I finally got hungry and had a small bit of Fage with some bear naked banana nut.  YUM!  I ate that while watching Rachael Ray make some monster T-bones for a holiday dinner.  Holy cow those must be some damn good friends if they are serving you up a T-bone.  I’m not sure what I would do if that happened to me.  I clearly cannot eat a whole T-bone by myself.  Would it be rude to ask for a baggie?

Went to MT today and you can tell it’s the holidays because class size is starting to twindle.  After MT we ran some errands and then it was back home for lunch!  I was starving! 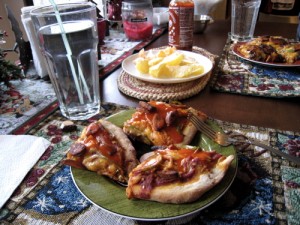 We had leftover pizza (extra buffalo sauce on mine) and in the middle is 1 clemmie and 1 orange.  I had two of the slices of pizza and 1/2 a clem and 1/2 the orange.  I am loving the oranges this season, they have been so juicy and sweet!

After lunch it was time to do yard work.  Yuck! I hate doing yard work.  All of the leaves on our trees finally dropped so there was raking involved.  And I also went through and pulled out or pruned all the dead plants, cleaning up around the outside of the house.  We were out there for 2+ hours.  Man that should totally be some HBBC points somehow!

Finally we were done and I could shower for the day!  Once out of the shower I fed Rocks his supper and got to work on ours.  While cooking I snacked on these: 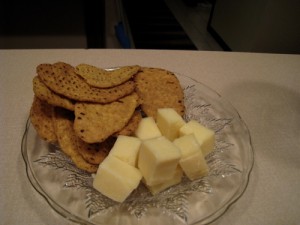 I had half a cheese cube and 3 of the foodshouldtastegood sweet potato chips.  Time for dinner! 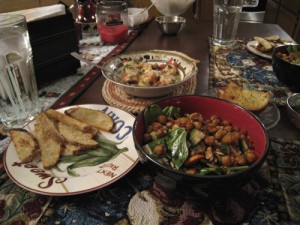 I made some oven fries along with a side salad that had:

Drizzled with just some balsamic and olive oil.  In the middle is the leftovers from last night.  I ate most of my salad and some of the fries.  Then I had two of the crunchy bread slices with the sauce and tomatoes in the seafood.  I also had one small scallop and one shrimp.  I was telling Scott that my favorite part of a dish like that is the sauce, tomatoes, and onions that I can put on the bread.  The seafood is good but the sauce is where it’s at for me. :p

Now I’m heading to the couch for some relaxing time!  Tomorrow I have more chores to do and I want to run, run, run!  Had it not  been dark when we finished outside I would have changed into running clothes.