Warning: Parameter 2 to WPE\Site_Preview::the_posts() expected to be a reference, value given in /home/customer/www/foodembrace.com/public_html/wp-includes/class-wp-hook.php on line 303
 December 19th, 2008: Lunch and dinner | Food Embrace

Hi guys!  Yesterday was such a busy day that by the time I finally got to sit down it was going on 9pm and I was pooped!  So I didn’t get the post up.

Before lunch I cleaned the house and then made three different kinds of bark.  I licked the spoon after each one before washing everything off!  YUM!  My fave is a dark chocolate one that I made for the first time.  I needed to eat but wasn’t super hungry thanks to the chocolate so I kept lunch simple. 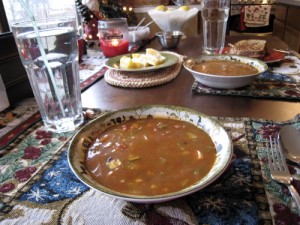 We still had a bit of leftover veggie chili and it was too good for me to throw it away.  However, there wasn’t enough for each of us to have some, so I added it to one can of southwest veggie soup and it worked out well!  In the middle is an orange.  I had most of my soup but not all of it and half the orange.  I was stuffed!

I did some more stuff around the house and then hit the Wii Fit.  The rain would stop and then start and then stop, and start.  I decided running was fully out since the weather couldn’t make up its mind.  I did 30 minutes on the Wii Fit and called it a day.  I’m glad I did something but admittedly I wasn’t super into it.

Then I finally showered for the day and threw on some comfy sweats.  It stopped raining and I decided to quick run Rocky out before it started up again.  We did the usual 1.0 mile walk and were back home before it got dark.

I was starting to get hungry but wasn’t ready for full on dinner.  Especially since I wasn’t sure what I was making yet.  I fixed us some small salads to get more veggies in for the day and to tide my hunger over a bit. 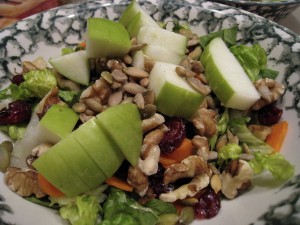 In the salad is:

All drizzled with some maple balsamic dressing.  YUM and totally hit the spot.  Then it was time to wrap Scott’s gifts!  All of them but one came in so I wanted to get them wrapped and checked off my to-do list.  While we ate salads, I decided on dinner and needed wine for it.  Scott opened up a bottle. 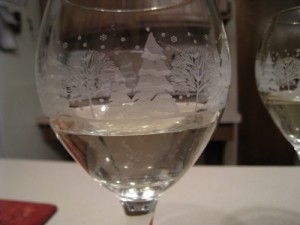 I had a very small glass while I wrapped his gifts.  There’s no bows on them yet, but I do have labels and have them numbered.  I always have a set way that he needs to open his gifts.  This one first, then this one, and so on. :p  Does anyone else do that or do you let your SO open them however they want?

It took me about 45 minutes to wrap his gifts and Rocky helped.

Two of his gifts turned out way better than I expected so I’m pretty excited for him to open them next week!

Finally it was time to start dinner! 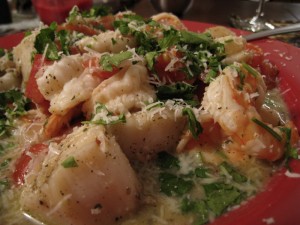 We had shrimp and scallops in a garlic wine sauce with tomatoes and shredded parm on top.  So good! 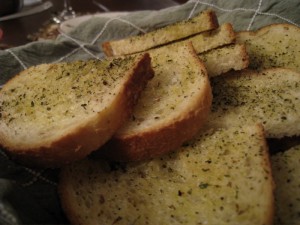 And crusty bread for dipping.

I had two scallops and 6 shrimp with 3 halves of bread.  Then we plopped down on the couch to finish the Pens game and have another glass of wine.  For dessert we sampled some of the bark! 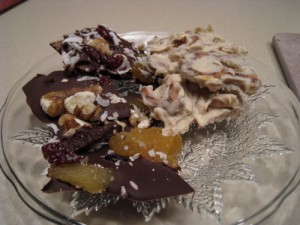 Only two were set, the other one was almost there but it takes a while so I was not surprised it wasn’t ready yet.  I had a small piece of each.  11pm and I hit the bed.  Whew it was a long day and I was worn out!