Warning: Parameter 2 to WPE\Site_Preview::the_posts() expected to be a reference, value given in /home/customer/www/foodembrace.com/public_html/wp-includes/class-wp-hook.php on line 303
 December 17th, 2008: Morning | Food Embrace

Hi guys!  It’s a little rough going for me this morning.  I slept longer than I wanted and I have a bit of a headache.  Boo!

Last night we finally watched the Pens game from last Thursday that we had taped.  Seriously that game seemed to last forever because the Pens just kept scoring and scoring.  The final score was the Pens 9-2.  Holy cow! However, even though we forgot to tape it, I know the score from the following game that happened on Saturday and they got their assess handed to them in a big way.  So I guess the celebrations didn’t last too long. 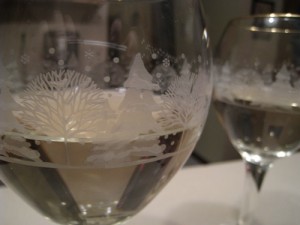 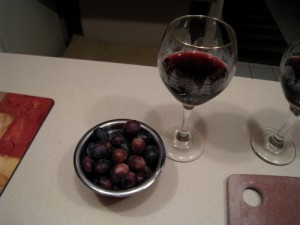 I was snacky but wasn’t in the mood for anything specific.  I decided if I’m going to aimlessly snack then it better be something good; grapes won out.  I didn’t drink the whole glass, only a few sips.  I started getting tired and was very much ready for bed.

I need to get back into my routine of being in bed early and waking up early.  I don’t like being in bed later than 10:30.  I know, whine much. :p  I woke up a little bit before 8am this morning and saw that there was a thin layer of ice everywhere.  Lovely.  I decided to wait a bit to see if it melts some before attempting a run.

I took Rocks out for his potty run and was surprised by how warm it was.  Compared to yesterday, today is balmy!  So I had hopes things would melt quickly.  I was getting hungry so I made some breakfast. 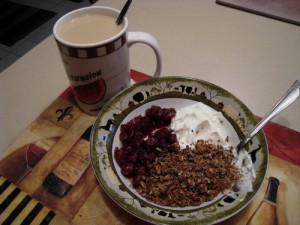 Perfect combo 2% Fage + cranberry sauce + chocolate granola = awesome.  Along with some coffee and creamer.  I checked the weather and it says it’s currently 30-31F which means below freezing.  Blast!  It didn’t feel that cold and in fact was very humid out.  I’m still hoping it melts, if not I guess it will be me and the Wii Fit.

All of my packages I bought yesterday have shipped already save for one and that’s coming from Amazon so I have faith it will be here soon.  Some of them arrive today!

Now I only have to focus on packages and getting the holiday cards out in the mail.

I’m flip-flopping about baking.  I would like to do some, it’s just if I have the time.  If I plan things out right, I might be able to squeeze some in.

I am feeling so much better now that shopping is over.  On to wrapping!  Rocky’s gifts get wrapped as well and I bought him something this year that is bigger than he is.  I’m curious to see how he responds to it.  I’m going to have to film it I think.

Off to get things done, work a bit, and hopefully get a run in!