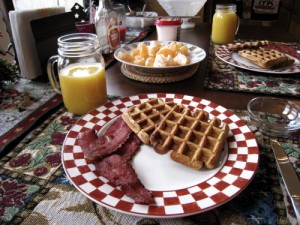 Hi guys!  I did indeed go back for another cup of coffee and only had about 1/2 of it.  I worked on some site maintaince stuff and then got up to make breakfast.  Scott got up at 10am which is just craziness for him on a Sunday but I’m glad because we did have some stuff to get done today.

I pulled some leftover waffles out from the freezer and heated those up in the toaster oven.  Along side was some turkey bacon and 3 clemmies in the middle.  I ate 3 pieces of bacon, most of my waffles, and a bit of the clemmies.  After cleanup, I headed up to shower and get started on our day of running around.

Because it ended up being a little later than we expected when we finally got out the door, only two errands got complete.  We ran to Target to pick up more coffee and look at some other things they had going on.  I’m glad we went because the holiday coffee was already on clearance!  I only saw three peppermint coffees left and I snagged them all! :p  Christmas isn’t even over yet and they are getting rid of all their stuff already.  Goodness.  Scott and I both picked up some heavy duty winter boots and I got a couple of running clothes.  A pair of tights and a longsleeved shirt that comes up higher around the neck.  That will be nice to help protect against the wind.  I also got another batch of new silverware, same as the new ones we just purchased not long ago.  The one package just wasn’t enough and we were running out of silverware quickly.  Two sets should be good, I hope!

Then we hit up Sam’s for some random items like vinegar and pet blankets.  By then it was going on 5pm and time to head home and call it a day. 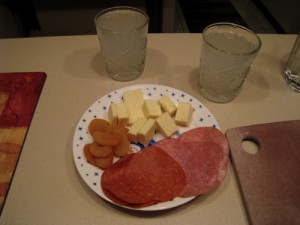 We got everything put away and I changed into some jammies.  Last year for Christmas, Scott bought me some footie PJs.  I put those on today and they are too big!

Like crazy too big, the crotch hangs down to my knees and everything pools and bunches at the feet.  Aww, I loved those jammies.  Scott said he would get me a new pair.  So I just changed into my regular jammies.

Both of us were a bit hungry, so I put out a plate of snackies for us to pick at.  I called my mom while I munched.  We had fizzies, the same as last night.  And on the plate is cheddar, apricots, salami, and pepperoni.  I had two pieces of cheese, 4 apricots, 1 pepperoni, and 1 slice of salami. 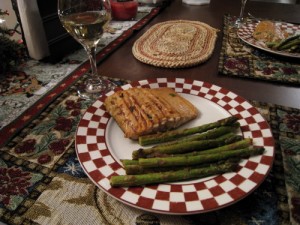 Scott put on Christmas music while I made dinner.

Now I’m off to sit ou the couch with another glass of wine and watch some TV.  Perhaps there is ice cream in my future.

See you tomorrow!  Hope you had a fabbo weekend!