Warning: Parameter 2 to WPE\Site_Preview::the_posts() expected to be a reference, value given in /home/customer/www/foodembrace.com/public_html/wp-includes/class-wp-hook.php on line 303
 Review: Leinenkugel’s Fireside Nut Brown | Food Embrace 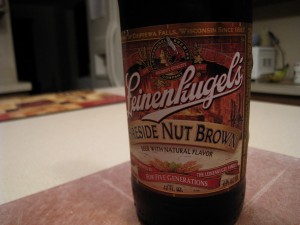 When it comes to alcoholic beverages, I only like two categories: beer and wine.

With wine, I’ll drink whatever you throw at me. With beer, I’m a little more picky. I like darker beers and I do not dig on wheat beers (of course there are exceptions). I never drink a light beer because I might as well just drink water. And I don’t drink cheap beer. I will try everything at least once, maybe twice, just so I can be certain in my opinion. Really when I break it down, it doesn’t seem too picky. Right?

My love for trying seasonal items explains why I have this Fireside Nut Brown by Leinenkugel’s in my possession. As I was perusing the beer aisle at my local grocery store (Thank you Ohio for allowing us to buy beer at the grocery store!) my eye fell up on this. I have had some Leinenkugel’s beers in the past and they have been good beers. The description of this beer talked about sitting by a fireside on a cold night and warming up with this beer. You had me at fireside, Leinenkugel’s! I picked up a sixer and was on my way. 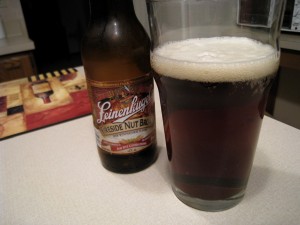 The first time I tried this beer I was in love. The flavor doesn’t hit you right away, it’s very subtle and at the end. There is a nice caramel flavor with a punch of roasted nuts. But it’s not a fake nut taste, you know how nut flavored coffees or creamers can have a really nasty fake flavor. This has none of that. It’s a good hearty beer while at the same time not being overwhelming or too pungent.  This has the perfect beer flavor, full bodied with a touch of sweetness at the end.

The color of the beer is an amazing dark amber color. I think if you served this at a party in some nice frosted glasses, the recipients would be very impressed. I would be impressed if someone gave this to me!

This easily has become a favorite beer of mine and sadly I only have one left in the fridge. I will be going to the grocery store soon and I have already informed Scott that we need to stock up on some of this. He wisely did not protest.

Guys, if you like beer and you can dig on trying some different flavors, I would highly suggest trying this out. The beer is amazing and is perfect for holiday parties or just kicking it back at home. It has a short seasonal run, only available November through December (Why must you torture me so Leinenkugel’s?!), so pick some up while you can and give it a taste.