Warning: Parameter 2 to WPE\Site_Preview::the_posts() expected to be a reference, value given in /home/customer/www/foodembrace.com/public_html/wp-includes/class-wp-hook.php on line 303
 November 9th, 2008: Lunch and dinner | Food Embrace

Hi guys! I had one of those days where time just seems to fly by and I have nothing to show for it! Okay well maybe I have a couple things in terms of eats but that’s it! :p

It took me a while to write my posts this morning and then I read only two blogs before I started getting hungry. It was also getting late, going on noon, and Scott still wasn’t up yet! :o I decided to get moving on Sunday breakfast because I knew that would get him up for sure. 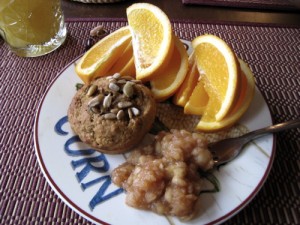 I made pumpkin cranberry muffins with half AP flour and half WW flour and they turned out awesome! Not too sweet, chewy, and dense like they had some staying power. I had one with some homemade applesauce and an orange on the side. I ended up going back for a second muffin and another small spoonful of applesauce!

After lunch and clean up, I asked Scott what his choice was for supper tonight, either a regular baked potato or a twice baked potato idea I had brewing in my head. He picked the twice baked! I knew I needed to get moving on that so I popped the potatoes in the oven (I love potatoes and a baked potato is heaven to me) and they smelled so good as they were cooking! As those were baking I put together what was going to be part of the filling. I also prepped some veggies for roasting to also have with dinner.

After that was done and the potatoes were cooked, I could finally head upstairs to shower! After I showered, I folded and put away yesterday’s laundry. Then I came down to finish the potatoes and get those ready to be heated up when we eat. Then it was cleanup and this took me till about 4:30.

I was able to sit down for a second before needing to start dinner. I loved Sunday breakfast but it didn’t last too long for me. 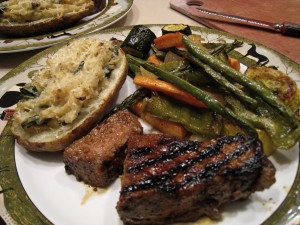 Dinner was grilled NY strip steaks that had been dry rubbed and getting tasty since yesterday morning. On the side was spinach and artichoke twice baked potatoes and roasted veggies. The veggies are carrots, summer squash, zucchini, green beans, green pepper, and some onion (because steak goes so well with peppers and onions). I covered those in olive oil and a little soy sauce and tossed them with some S&P and garlic powder. Roasted at 400 for about 15 minutes or so.

The steaks were grilled inside because it was cold and rainy outside. I had only 1/3 of my steak because I had so much meat yesterday (or so it seemed) that I wanted to focus more on veggies today. Everything was soooooo yummy! I didn’t even eat all the portion of steak on my plate, I was too busy eating the veggies and potato! 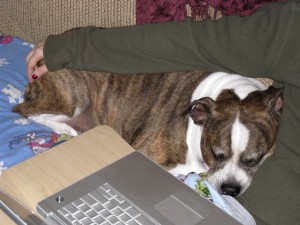 I sat on the couch to finish up this post and Rocky needed some snuggle time. He nudged me till I moved the lapdesk so he could squeeze in. :p It’s been a rainy gloomy day today so he has been in super snuggle mode.

We are going to watch some TV for a little bit and then I’m heading up to read in bed for a while. Have a good Sunday guys!