Warning: Parameter 2 to WPE\Site_Preview::the_posts() expected to be a reference, value given in /home/customer/www/foodembrace.com/public_html/wp-includes/class-wp-hook.php on line 303
 November 7th, 2008: Lunch and Dinner | Food Embrace

Hi guys! It wasn’t too long after my breakfast post that I quick went upstairs to paint my nails. I was feeling very girly. I was going to paint them for Halloween but ran out of time, so I did them today! Before leaving for my appointment, I had half a blueberry Z bar that I didn’t get a picture of because I was walking out the door as I was eating it.

I love the person who does all my waxings, she’s awesome! We chatted for a bit and after my appointment Scott and I headed over to WF. I was starving by this point and my only focus was getting food in my bellah! 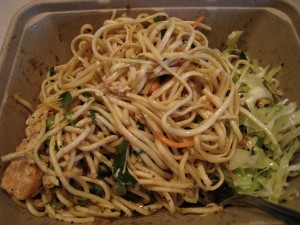 I picked up some prepared foods and a small container of soup for lunch. In this container from left to right: 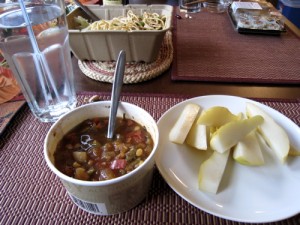 Here’s my full lunch spread, soup and a pear on the side. The other things are in the middle of the table. My soup was spicy chipotle veggie something. It was way spicy!

Too spicy for me. I liked it and it smelled so heavenly as I was holding it on the ride home but it wasn’t great, just okay. I ate all of the pear and several bites of the Asian pasta. The spicy salmon pasta was icky and the crunchy cabbage wasn’t as good as it normally is. What a strikeout at WF today! I have also decided that I just do not like the way WF cooks their salmon. I don’t know exactly what the problem is but it tastes way too fishy and is a little gaggy.

I was freezing today! Once it started raining the temps dropped dramatically. Part of the reason I got soup was to help warm me up but it didn’t work. I changed into my garden gnome flannel jammies and made some tea. 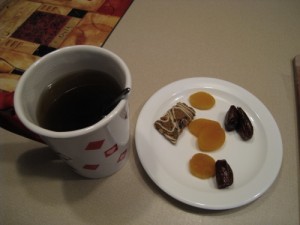 Along with my tea I made a plate of little foods. I had the other half of my Z bar, 3 apricots, and 1 date off of the plate. My tea was peppermint with 1 1/4 spoonfuls of honey. I love peppermint tea! My favorite if I’m drinking tea straight up. This helped warm me up!

After lunch I did some work and read some blogs. And I waited on UPS to deliver my game. Eventually it was time to feed Rocks his supper and for me to find something for us to eat. I was really hungry since my lunch was kind of craptastic. I turned on the oven and was going to heat up a Kashi pizza when Scott reminded me that there was leftover pizza in the freezer! Not the crappy pizza we had this week but awesome pizza I made a little bit ago. Wheee! 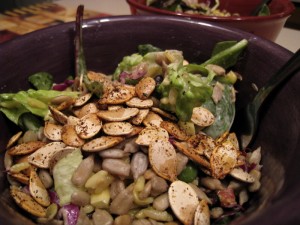 I got some salad stuffs at WF today, so we ate that while the pizza was heating up. It has:

Topped with a bit of WF ranch dressing. It was only okay. I must be in some kind of funk because I’m hungry but only meh about eating anything. 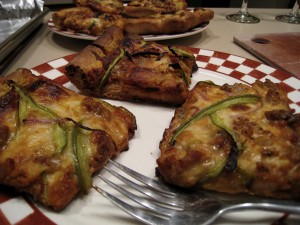 The pizza had green peppers, red onion, and some Italian sausage on it. It was so much better than that other pizza! There’s three slices on my plate but I only ate two. While eating, we finished the Pens game from last night. Damn what a crap game they played. However, during that time, our game finally got delivered! After 7pm. Jeeze UPS!

Scott did clean up and I came in to blog. Now I’m off to have a glass of wine and snuggle with my boys. And possibly take a look at our new game.