Hi guys! What a crazy day so far, eh? I was waiting around for Scott to get his stuff together so we could finally go vote! I was nervous that by the time we got there, we would be waiting in a huge line. There was nothing! We got there around 12pm and walked right in. The whole thing probably took 15 minutes and that’s only because we had to take the time to read all the issues on the board to vote on.

I must say, the poll workers they had were not the greatest. The people behind the desks taking names were fine. The people who set up the machine for you were not. They were all really young kids and all they did was sit there until you went up to them telling them you needed to vote. Then they got up and took you to a machine. They were not greeting people at the door or directing people as they walked in. What they did do was gossip about every person who walked through the door. I know because I was lucky enough to have a machine right next to their little seating hub and I got to hear all their talk. They didn’t even thank people for voting or acknowledge them in anyway. I had to go back up to them to get my sticker.

After voting we had to run some quick errands and then it was back home for lunch! 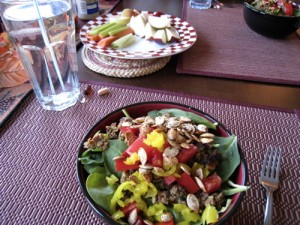 I wasn’t quite sure what we were doing for dinner today so I was over compensating with lunch a little bit.

I made a decent sized salad with:

I topped it with a little bit of WF ranch dressing. In the middle is two wee apples sliced, and some carrot and celery sticks. I ate all my salad and all of the apple. Scott was the one who ate the carrots and celery.

After lunch and cleanup, I did some work until it was time to get ready for MT. I needed something light to eat before class, I tried a banana nut Larabar and it was all I could do to swallow it. Ugh, it was awful. I moved on and tried a coconut cream Larabar. Yeah, that didn’t work either. Ick! I almost gave up but started getting a bit hungry. 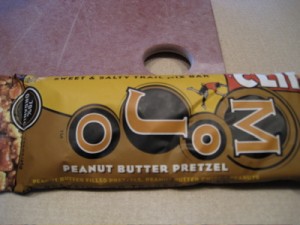 I went with a Clif Mojo PB Pretzel bar. I had these before and it was okay but this time around it was awesome! It wasn’t very peanut buttery but it was enough. I inhaled it!

MT class was good. We did some knees and some kick drills. I tweaked my elbow a little bit. Grrr! Stupid elbow.

I had plans of heating up some Shepherd’s pie for dinner tonight. I wanted something quick so we could get in front of the TV as quickly as possible. Scott has been craving some sort of Asian food and he rarely craves anything. So when he does, I try to accommodate him. He deserves to have some fun too! So we decided on some Chinese food for tonight. 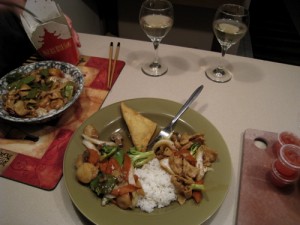 On my plate is 1/2 cup of steamed jasmine rice and a crab rangoon. On the left is some veggie stir-fry and out of that I ate some napa cabbage, carrots, green peppers, and broccoli. On the right is some spicy chicken with broccoli. I ate everything on my plate. In the back is some white wine. We decided it was going to be a long night and we might as well have some fun!

It looks like a lot but I didn’t have too much. I’m saving room for some fortune cookies and perhaps a wee snack.

Okay guys, I’m off to fully watch the updates and hang with my boys. See you tomorrow!