Hi guys!! I’ve had a pretty good day today. I probably could have been more productive but I’m happy with the day and that’s what matters! 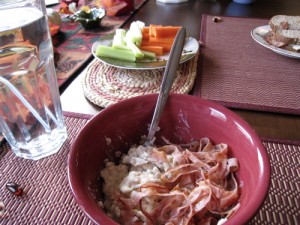 PT kicked my butt today! It was more circuit training and I did a bunch of stuff with resistance bands. Then at the end I had to run some suicide drills. I was beat! When I got back home I took Rocky for his walk and then I came home and did some Wii Yoga to get some stretching in after my workout. I did about 16 minutes of the yoga and unlocked a new pose. I only have one pose left to unlock!

By this time I was starving and I really wanted something cheesy and a garlicky. I decided this would be a perfect time to try some savory oats!

I cooked the oats and then added the cheese wedge and let it hang out. As that was doing its thing, I scrambled the egg whites and cooked the ham. Then everything came together in the bowl! It smelled heavenly! I took a bite and it was okay. I ate about a 1/4 of it and then I got gaggy and realized I didn’t care for it as much as I thought I would.

I asked Scott if he wanted to try it and he said he would have a bite after his lunch. I could tell by his tone that he was only trying it for my sake and to say he did. Well guess who ended up loving this concoction and finished the bowl? Uh huh, Mr. Scotty.

In the middle of the table is a sliced carrot and some celery sticks. Since I didn’t eat my oats I needed something else. 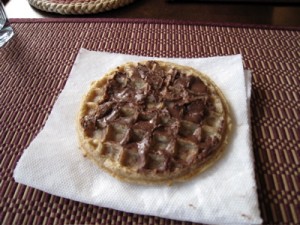 I toasted up a kashi waffle and topped that with about 1/2 TBSP of dark chocolate PB. Yum!! I did eat several carrots and only a few celery sticks; they were a little gaggy too. Don’t know what my deal is!

After lunch, I started some laundry, fed my birdies, and got the mail. Then I did some work and then it was time for me to decide about dinner. We still have the leftover turkey thighs but I was not in the mood for a meat product. The thought of eating the turkey just turned my stomach. I just wanted some veggies. 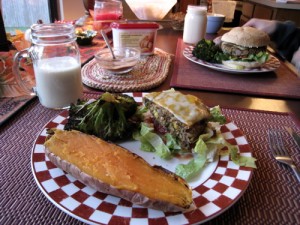 I ended up making some black bean burgers. I had half a burger open-face style on half the bottom of a bun. There’s some romaine and salsa on the bun and the burger has a 1/2 slice of colby-jack cheese. Along with 1/2 a baked sweet potato which I then topped with a bit of butter and cinnamon sugar. And then there’s some roasted broccoli which I just tried today and LOVE!! I coated the broccoli with some olive oil, a little soy sauce, grated garlic and ground black pepper. Roasted at 425 for about 10 minutes and then I let it sit in the oven for a little bit after I turned off the oven. So good! It was nutty and a little salty from the soy sauce and so yummy. Scott, however, didn’t care for it which is okay because there’s more for me!!!

I ate all of my sweet potato and all but 2 bites of my broccoli. I had about three bites left of my burger which was also yums! Very pleased with dinner tonight and very full. I washed all that down with some vanilla soymilk.

Now I’ve got to fold some laundry before heading off to SF class tonight. I’m looking forward to my run tomorrow. Hooray for a good day!