Hi guys! I wanted to post my Sunday breakfast because I’m not sure what I’m doing about dinner yet. That could mean we eat late and I wanted to get as much in today as I could.

It wasn’t long after I posted today’s recipe that Scott got up. Very early for him on a Sunday but to his credit, his body thought it was 11:30am. :p He pulled out his laptop, sat down with me on the couch and it wasn’t five minutes before I heard his stomach growling. He said he was fine so I did some work and finally it got to a point that I couldn’t take it anymore! I got up and started making breakfast. 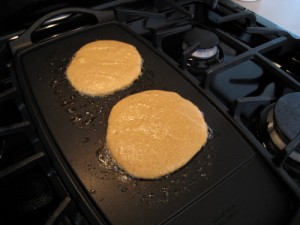 I knew I wanted something a little sweet because we didn’t have that last week nor did I have anything sweet when we went to breakfast on Thursday. I decided on some pumpkin pancakes since I had pumpkin in the fridge that needed used up. 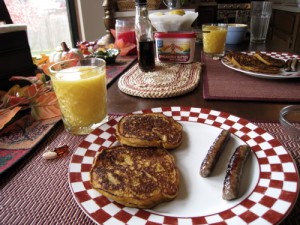 I had two pancakes and two sausage links. I dipped the pancakes in some maple syrup and washed everything down with a glass of OJ. The pancakes were nice and fluffy! I typically make pancakes with a mixture of cornmeal and all-purpose flour. The cornmeal gives them a nice texture and keeps them airy. 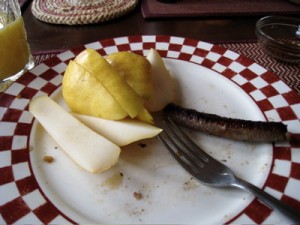 I was still a little bit hungry so I sliced up a pear and had 1/2 of the sausage link. That did the trick and I was filled up!

After breakfast and cleanup, we headed out to the garage. I finally realized that this was more Scott’s area and I really wasn’t doing anything but sitting there. I helped him bring in the deck furniture, then I came back inside to shower and do a bit more work. I’ve started laundry and am currently wondering what to make for dinner. I would love to have some french fries! I have some store bought ones in the freezer that need used up (so I can stop buying more!) and am trying to plan a meal around those. :p 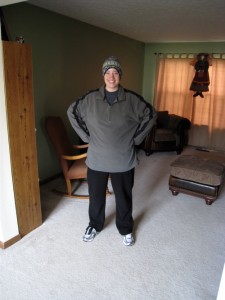 Caitlin is running a contest on her blog and the winner gets a $200 gift certificate to Athleta. To enter the contest you have to take a picture of your lamest workout outfit and describe it! I’m not officially entering the contest because I just bought some new stuff and I’m sure someone else could use the gift certificate more. However I thought it would be fun to post my current winter running outfit since I talk about how lame it is all the time!

Starting at the top, that’s my little hat which is blue and white and has snowflakes on it. It was a rare hat that actually came all the way down over my ears. Most hats don’t cover ears which makes no sense to me, that’s the part that gets cold! However it does sort of make me look like I have a beanie head.

Then I have on a long-sleeved, men’s workout shirt that wicks away sweat. I found it on sale at Target and it cost less than the women’s shirts, so I bought it. I actually love this shirt. It looks nice on me and keeps me warm and dry.

On top of that is a men’s half zip fleece jacket, XL, which is gigantic on me. I have my hands on my hips and holding it back some so you can at least see there’s a body in there! It hangs down almost to my knees, is super wide, and the sleeves are so long. I got it on sale at Old Navy, super cheap and I figured it was no big deal to sweat it.

And last but not least, the pants are men’s XL, fleecy PJ bottoms. Yes, complete with a hole in the front for elimination purposes. My jacket totally covers that up! I couldn’t even tell you where I got those. They are warm though!

And there you have my lame winter running outfit. Scott said I actually look very pulled together.