Hi guys! For some reason today I was really dragging about going to MT. I felt like we had so much to do and not enough time to do it. I did go though! I didn’t get any exercise in yesterday other than Rocky’s 2-mile walk and there was no class Thursday so I needed some class even if my heart wasn’t in it. Once there though I was fine and everything went smoothly.

After class we ran to Lowe’s quick because Scott needed a new elbow something for the dryer vent. The part that connects the dryer to the start of the vent. Our house is weird (and now thinking on it, I should have taken a picture) and the connector was just odd. Whomever put it in did not do a good job. So Scott figured now was the time to fix it. While he was looking at that stuff, I headed over to the xmas decorations. I wanted to take a peek at the trees they had going on. Ours is okay but I wanted something in the same family just a little bigger. And I like the trees to look full, not spotty where you can tell it was put together. And I’m talking fake trees, as much as I love the smell of pine, we go the greener route and do fake. Anyway, the price difference between the pre-lit trees and just plain trees was amazing. Holy cow. I decided on plain because heck I can put lights on no problem. And if it saves me an extra $200 even better! I scored a nice skinny (Aspen?) 7ft tree for $78 and 25% off of that because they were having a sale. I also bought a new welcome mat and a really nice tree skirt that matches our living room. Wheee!

After Lowe’s we hit up Sam’s for some things we needed like TP and all that fun stuff. I got some food stuffs for the holidays as well like some scallops that are huge! And I’m talking like the size of my palm huge! And some lump crab meat and some really nice wines and cheeses. YUM!

Once we were finished it was finally time to head home! We got back home around three-ish and both of us were hungry. When we first got home I snacked on four of these. 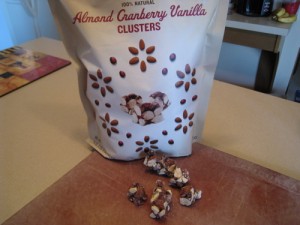 OHMY! These things are so good and so addicting I’m going to have to seriously watch myself otherwise I will convince myself that since they are cranberries and almonds they are healthy and I can have whatever I want. :p Seriously, these things are awesome and they even stopped my hunger in its tracks.  They are made by True North. 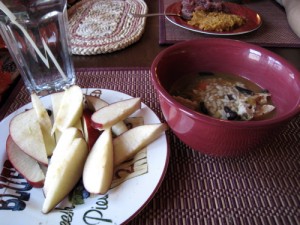 I still made a quick and simple lunch though. I heated up a can of light southwestern chicken soup and I added in more rice and some leftover turkey. I split the can with Scott and on the side I had a red delicious.

After lunch I cleaned the house. Scott moved the furniture in the living and I was able to swiffer then mop (hardwoods) behind them which needed done so badly. I fed Rocky and got him taken care of. Then I decided I needed to do a quick run. It was a quarter to 6pm and starting to get dark. I decided to just head out and do the best I could in the dark. It was so warm today that I only needed one pair of pants, shirt, and my hoodie. 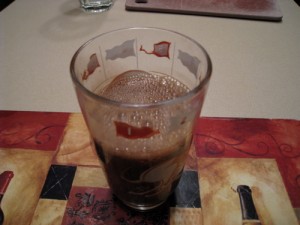 I busted out a quick 2.5 miler and was soooo happy! Once home, I chugged my CS and then jumped in the shower. After showered I moved the furniture back and discussed dinner options with Scott.  I didn’t really want to dirty up my nice clean kitchen too much.  Plus I was pooped!  I was thinking about what one-pot options I had and risotto came to mind! 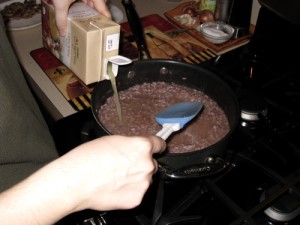 While supper was cooking we snacked on this. 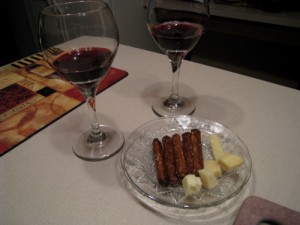 A small splash of red plus some cheese and 7-grain pretzel sticks.  I had two pieces of cheese and two pretzels before the photo was taken.  After I had my wine, another piece of cheese and another pretzel. 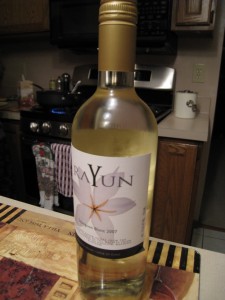 Since it was a long day, Scott decided to open up a bottle of wine for us to try.  It’s a Sav blanc that I purchased during a recent outing but I can’t remember from where. 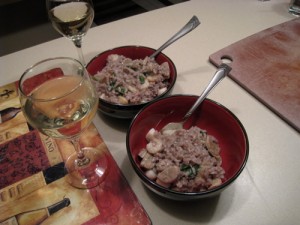 We had a red wine risotto with shrimp, scallops, garlic chicken sausage and some spinach.  So good!  Sometimes you just need to plop down on the couch with a glass of wine and a big bowl of something yummy to eat.

I had such a great day today! The only thing that didn’t get done was decorating and I can do that soon. Everything else got accomplished, even a run! So I’m very pleased with how the day turned out.