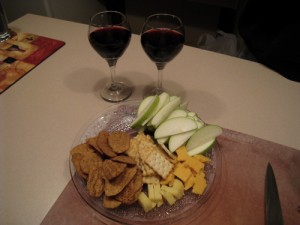 Whoa guys but I am pooped! Up front, I had a glass and a half of red wine last night upon returning home from SF class. Let me explain. Last night Scott and I tested for our third degree brown belt (last test before black). I was stressing this test like no other. I knew everything save for one thing that gave me trouble. That’s what was worrying me. I could not wait to get Monday over and done with. I knew it was going to be a long day because I had PT in the morning and then the test that night. Since there were a group of us testing all for different levels, it took a while. By the time we were done it was 10pm, class is normally over by 9pm.

Both of us passed our test and except for the part that I knew was going to give me trouble, I feel really good about my test and like I knocked it out of the water. Scott and I always celebrate a test with something to drink because it is something worth celebrating. And since yesterday was such a long day and I was stressing hardcore, I needed to relax. Hello red wine.

Both of us were hungry as well so out came a snack plate with:

I had all of the English cheddar which was about 2oz, and most of the apple (Scott had a few bites of that). I also had one Chicken in a Biscuit cracker and realized how much I can’t stand them anymore. And some of the sweet potato chips which are just awesome and are a perfect salty snack if you are in need of some salty goodness.

Crazy! By the time we sat down on the couch it was going on 11pm. I. Was. Tired. I slept and slept. Got up at 7:30am to a slight headache from not enough sleep. Booo. 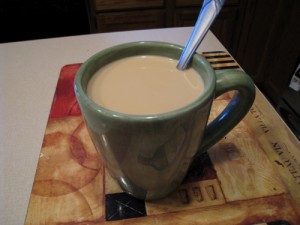 I took a quick peek outside and saw no snow. The forecast was for snow today and tomorrow yet we got nothing. I just looked and now we are only supposed to get snow today and only a dusting. Jeeze the weather changes too much. Since I had a little bit of a headache, I wasn’t hungry right away this morning. I decided to just start with some coffee and let the hunger come whenever it wanted. 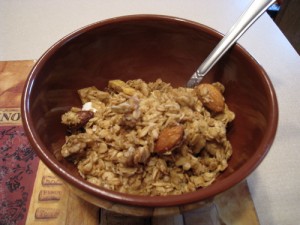 Eventually my headache subsided and I got a little hungry. I had no choice, I had to eat something so I could go on a run later. I decided on some 2% Fage with some Bear Naked banana nut granola. YUM!!

The countdown to Thanksgiving is on! I go and pick up my turkey today and tomorrow it meets the brine.