Warning: Parameter 2 to WPE\Site_Preview::the_posts() expected to be a reference, value given in /home/customer/www/foodembrace.com/public_html/wp-includes/class-wp-hook.php on line 303
 November 19th, 2008: Lunch and Dinner | Food Embrace 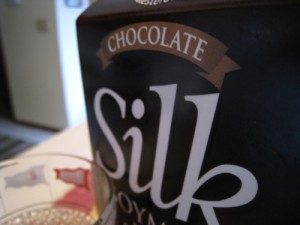 Hi guys! I did a little bit of work and then I got Scott up for the day. I changed into my running gear and was out the door. It was cold but it wasn’t as cold as yesterday which is good because yesterday was brrrrr! I kept a very nice easy pace, my HR was in the low 160s the whole time. I realized how much of a great pace this is for me. Sure I may not burn off as many cals but I’m still burning something so it’s all good. I did my new longer route again today which I forgot to measure yesterday. I will do it today for sure! Since I wasn’t running as fast, it took me around 31 minutes to complete which isn’t that bad of a time. As I ran I was basking in the gloriousness of winter running. I love it! I so much prefer cold running to hot running. However check back in come January and see if I still feel the love.

I must tell you of the nastiness that I saw today though! Well it’s nasty to me, maybe it’s not nasty to others. :p I am not a walk around barefoot type of person. It skeeves me out to think of my bare foot touching god knows what on the ground and if I am barefoot and I step on something I get so grossed out. I try not to think about it or I’ll start gagging and stuff. I always have shoes or at least socks on. It also grosses me out to see others barefoot walking around like it’s no big deal and if I catch a glimpse of their foot and it’s dirty, gagging starts. Feet gross me out, what can I say. So I’m out running and it’s cold, right? As in, I’m wearing:

And that’s to keep me warm as I run. As I’m running along I see this chick walk out of her house, down the driveway, across the street, drop off mail and walk all the way back. IN HER BARE FEET. Ew, ew, ew, ew! Dude seriously, it’s like 20 some degrees out, walking around bare foot is just crackhead crazy.

Once I got back home, I drank some CS and then I drank some more. I changed jackets, put Rock’s big boy jacket on him and we were out the door. I had to put the hood up on my jacket, the wind was killer. If it wasn’t for the wind, it would have been perfect outside. It must have just started because I didn’t really notice any wind during my run.

After we got back I showered quick and did some Wii Yoga. I did about 15 minutes and then I started getting really hungry. 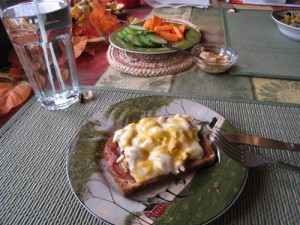 For lunch I had an open face egg sandwich. Toasted omega bread with some WF BBQ sauce spread on it, Topped with 2 scrambled egg whites seasoned with S&P, garlic powder, and chili powder. Then I put a slice of colby jack on that and back in the toaster oven till it got all melty. In the middle are some carrots and cucumber slices to eat with some hummus. I had a new container that I opened and it better not go bad on me so quickly this time!

I knew this wouldn’t be enough for me for lunch and as I was eating I was contemplating on what else to have. I decided on what became the best combo ever! 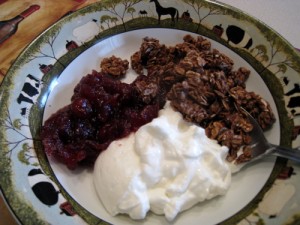 A little bit of 2% fage, a few spoonfuls of organic whole berry cranberry sauce, and some bare naked chocolate granola. Oh my gravy this was heavenly! You all know I’m a huge fan of cranberry and chocolate anyway, and this just kicked things into overdrive. The sweetness of the jelly balanced out the tartness of the fage while the granola gave it plenty of crunch. Amazing and I will definitely be having this again!

After that it was more worky and doing some stuff around the house. I washed all the bedclothes, pillows included, to help get rid of the sickies. Scott is feeling better so there’s no need to be sleeping in that stuff, ew.

Then it was time to make dinner which was inspired by Tina! Today is veggie day and I was having trouble coming up with something to eat. Normally I have a plan but had none for today. I saw on Tina’s blog that she had rice and beans last night and decided that sounded good! 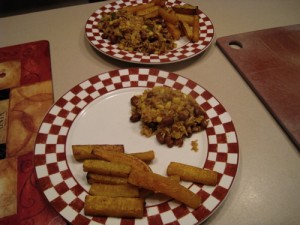 This was my first time making some squash fries and I have to say they turned out so incredibly yummy! I peeled and cut up a squash into “fries” and seasoned them like I would regular oven fries with some olive oil, pepper, chili powder, garlic powder, and some season salt. I baked them at 400 for about 15 minutes or until brown and cooked through with crispy edges. We dipped those in organic ketchup and both of us loved them! I will be making them again for sure! I went back in and had four more fries because they were calling my name.

Now I’m off to get ready for SF class. See you guys tomorrow!