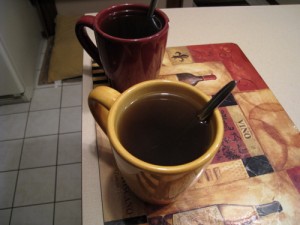 Hi guys! Not long after posting my dinner entry, we took Rocky out for his quickie nighttime walk. Oh it was soooo cold! The wind was blowing like crazy and it was snowing hard. I could barely see! I wasn’t worried about it sticking though as the snow has been melting as soon as it hits the ground. To help warm us back up as we watched TV, I made us some tea.

Peppermint tea with 1 1/4 spoonfuls of honey. YUM! Peppermint tea is by far my favorite tea. Chai not included because Chai is a thing of its own, in my opinion.

I hit the hay around 10:30ish and was out like a light. I’m so thankful for flannel sheets and an electric blanket because it makes getting into bed for the night a pretty awesome feeling.

My alarm went off at 6am this morning but I decided to sleep in a bit. Then I stretched and popped something in my neck and now it hurts.

It’s like I tweaked a muscle wrong or something. I slept till about 7:30 and decided that was a good time to get up. 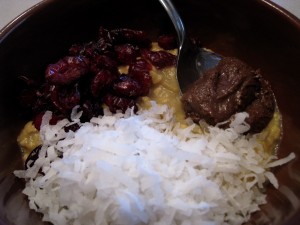 I’m trying a new schedule out of getting up and eating breakfast first, then going out for a run. I considered getting up at 6am to start my runs earlier, however that would mean I was running in the dark by myself. Considering there is currently an unsavory gentlemen running about doing violent and inappropriate things to women and has yet to be caught, I decided that running in the dark by myself is probably not a wise choice. I’ll stick to daylight for now.

I made oats this morning to help power me through till lunch. I made some pumpkin oats because I had some leftover pumpkin from yesterday. 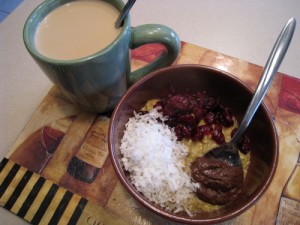 YUM! It was very filling and I left a few spoonfuls in my bowl. Had that along with morning coffee. Adding pumpkin to oats makes the volume go waaayyy up! I always have a good bit left in the pot for Scott when he wakes up. Today there may even be enough for tomorrow’s breakfast! Off to pound the pavement, gotta pile on the miles!