Morning OHCers! I stuck to my plan and woke up at 6am this morning. :o It was snow-raining (where it’s half rain half snow) when I let Rocks out for his potty run this morning. It seems to have snowed last night as well; a few things, like the grill, have a bit of a dusting on them.

I did end up making us some drinks but I only had a few sips before handing it over to Scott. It was a combo of cranberry juice and cider. I was still way full from dinner and totally didn’t need the drink. I stuck to water instead. We finished the Pens game and then I headed off to bed to read for a while. It was a little after 10pm when I finally called it quits and turned out the lights.

Getting up earlier this morning has been so nice!  I do not feel rushed at all. 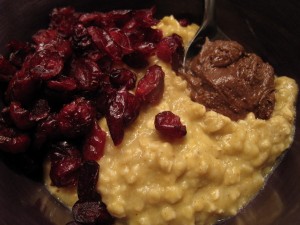 I made a pot of pumpkin oats. I haven’t had oats in days and wanted something with some staying power.

My mix-ins were simple today, cranberries and a spoonful of dark chocolate PB. I read the serving size on the cranberries, and it said 1/3 C equals 1 serving of fruit.

That’s a lot of dried cranberries! Maybe spread out over the day it wouldn’t be bad but all at one time would be a bit much I think. 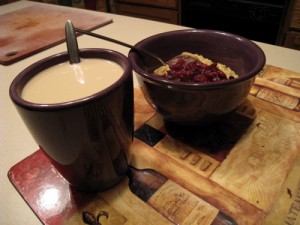 Two of a kind

Had that along with morning coffee + creamer. I didn’t even finish my bowl of oats! There’s a good bit left in my bowl. I was hungry this morning but not enough for this batch I guess. Hopefully it will still hold me over.

I haven’t been taking a picture of it because it didn’t occur to me, but I have been drinking some emergen-C to help battle Scott’s sickies. *fingerscrossed* I don’t catch it! 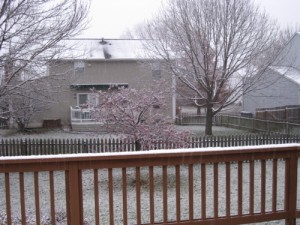 I was in the office when Scott came downstairs and said, “Oh my”. I had to see what he was talking about and the snow rain had switched over to full snow! Wheee!!! I hope it continues for a while, I love snow.