PT was legs today, I did sets of squats with my feet on weights (like weights that go on a barbell) which lifted my heels up. This was to place more focus on the quads while squatting and it worked. Whew! Then I did squats with 30 and 35lb dumbbells. Holding them, squat down so the dumbells touch the floor. I did those okay but my last set was rough! And I worked on hamstrings. Leg work drives me bonkers. I desperately need it but as I workout, I can feel how weak they are and how much they need to become stronger, and that’s the frustrating part to me.

After PT, I came home and took Rocky out for his walk. Ooooo it was cold! It’s below freezing and windy which made for a not so pleasant walk. I almost cut it short but decided that wouldn’t be fair to Rocky, who seemed just fine even though he didn’t have his big boy jacket on, so I kept going. I was glad to get home though!

I was starving by this point but it wasn’t even noon yet so I tried to hold off. Around 11:30, I couldn’t take it anymore and decided to make lunch. 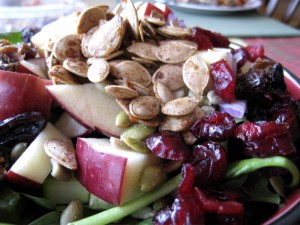 I had a big salad with: 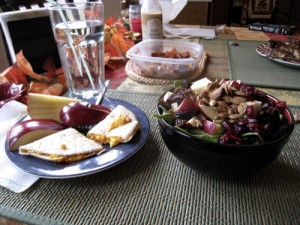 And I drizzled that with a little bit of maple balsamic dressing. On the side is the rest of my apple and a frozen breakfast quesadilla that I was eating because I was asked to review it.

In the middle is the leftover carrots and cabbage from dinner last night. Scott had leftovers for his lunch. I ate all of my salad, only 1/2 the quesadilla, and most of the remaining apple. I also had three bites of cabbage, 2 carrots, and 3 bites of the porkchop. Couldn’t resist it, it was soo amazing!

After lunch, I did a little bit of work and some laundry. Then I moved to the kitchen to do some more recipe experimenting. I love playing around with ideas! Back to more work and laundry. 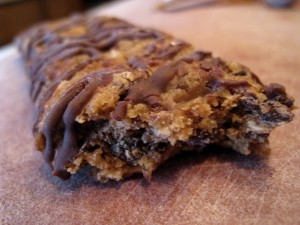 Around 2:30-3pm, I started getting a bit hungry and knew I would not make it till dinner. I decided on a chocolate chip Z bar (I forgot I even ate this until I saw it when I downloaded my pics! Hooray for taking pics of my food!). It was okay, honestly a bit too chocolatey for me. I still love Clif so that’s okay.

Then it was time to get started on dinner which was also another experiment! 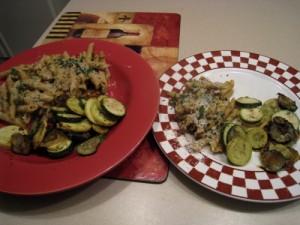 Everyone seems to be doing “his and hers” lately, so I thought I would do one tonight! “His and Hers” pasta dinner.

I made some penne and worked on a new sauce idea. On the side we had some sauteed zucchini and summer squash. Yum! I ended up going back for 7 more pieces of penne (it was mini penne, don’t get excited!)and I had two small slices of bread with a smidge of butter on them. Scott and I are staying in and relaxing tonight. Both of us have some work things we need to get caught up on. See you tomorrow!