Warning: Parameter 2 to WPE\Site_Preview::the_posts() expected to be a reference, value given in /home/customer/www/foodembrace.com/public_html/wp-includes/class-wp-hook.php on line 303
 November 16th, 2008: Morning | Food Embrace 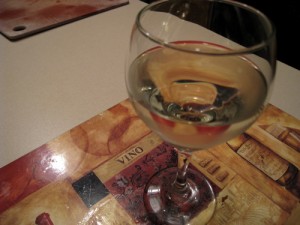 After posting last night, Scott poured me a glass of wine and we got settled back on the couch to play Gears until we got to a place where we could stop it for the night. I think we’re close to the end, or at least it seems so. I have to say that so far, I do not like 2 as much as I loved the first Gears. Two doesn’t have nearly as much fighting but it has more lame stuff, like obstacles you have to get around.

We reached a good stopping point and started watching the Pens game. While that was on, I munched on a snack. 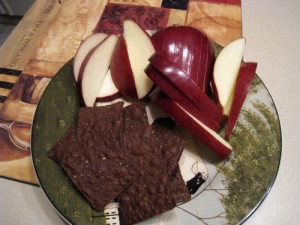 I sliced up a red delicious since I was a little hungry and needed a fruit for the day. On the side are a few FoodShouldTasteGood chocolate “chips”. Oh these are sooo good! A little salty and you get the chocolate flavor at the end. Even Scott likes them and he’s just okay with chocolate.

Then I needed a little sumtin’ sumtin’ so I moved to this: 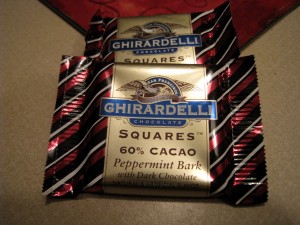 I only had one even though there are two pictured. We watched the first two periods of the Pens game and then I needed to head to bed. I was soooo tired and was looking forward to my own toasty bed. Mmmm! 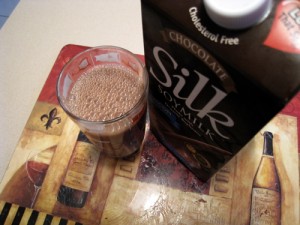 I slept perfectly! The bed was comfy warm and Scott didn’t make any noises at all during the night. Bliss!! However Rocky getting me up at 7:30 this morning was not bliss. I wanted an extra 1/2 hour but he wasn’t having it. I got up and peeked outside to make sure it wasn’t raining. Nope! I could go running!

I knew it was going to be cold so I threw on all my cold weather gear. It was indeed cold out and even spitting snow as I ran.

I love running in the snow! I love running in cold weather, I much prefer that over the summer heat. It was windy outside! :o I have to say that both my jacket and my hoodie do a great job protecting against the cold and wind. I could not even feel the wind. Had it not been for feeling it on my face, I wouldn’t have know it was windy. Seriously, that’s how great they are at stopping the wind. Only my junk trunk and thighs got chilly this morning. I’m going to have to get some tights. Anyone have recommendations?

I did a full 2.4 miles and it was rough going. My shins were aching and I realized today that when I run, I think I put more weight on my right side than my left side. Weird! And how would I correct this? I do this when I jump rope too! I was also tired and my feet were making the “clomp clomp” noises as I ran. I only saw one other person as I ran this morning and it was another runner! She waved at me.

I came in and had a huge glass of CS plus another wee amount. Then I changed jackets and was back out with Rocky. The snow picked up by this time, not too much and it wasn’t accumulating but it was nice to be out in it. 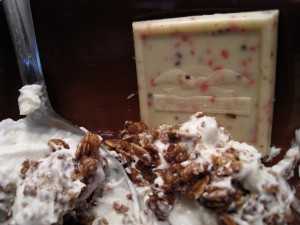 I seriously debated doing the Wii after my run and finally decided to just do a bit because I did need to stretch. I did about 14 minutes. Then it was time for breakfast! I only planned on having a small something because it was later in the morning and I knew I would be starting the official Sunday breakfast soon. I decided on some 2% Fage, more than 1/4 c but less than 1/3 c, with some chocolate granola. And then I added a square of peppermint bark. Because it’s Sunday and I was a little cranky so that’s how I rolled this morning. 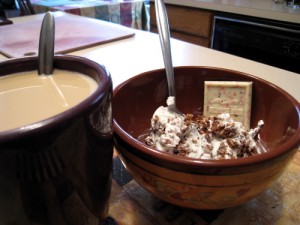 I had that with my morning coffee + peppermint creamer. So yum! I had the granola first and saved the bark for last. It was such a nice decedent treat and tasted soooo good with the coffee. MMMM!

I’ve got a lot on my plate today which includes some recipe experimenting.

So I need to get moving!