Hi guys! After I posted, I worked on some things and then decided to get my butt in the kitchen and get cooking. I had lots of ideas swirling around in my head that I wanted to work on and experiment with. Some of it was for dinner, which involved making a brine for some nice loin chops. After puttering around in the kitchen for a bit I got a move on Sunday breakfast because I was getting a little hungry and I heard Scott waking up. 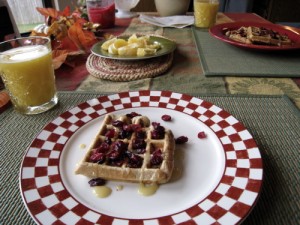 I made us some waffles and sliced up an orange. Pretty easy no fuss breakfast this morning. I topped my waffle with some dried cranberries for a little more chew and a little more sweetness. After lunch, I did some more things in the kitchen and cleaned up all the dishes that had accumulated. Then I did some more experimenting! My kitchen can only be so cluttered before my head explodes. If it’s too cluttered then I can’t think and get frustrated and flustered. When things are clean and I have space to move around, I can work sooo much better.

After I did one last experiment, I finally ran up to to shower! Oooooo my shower felt so good today. The water was perfectly hot. I shower on full hot water, no cold. Scott calls them molten lava showers.

After my shower I started in on laundry and some work things. I didn’t get as much work done today as I would have liked but it was enough. 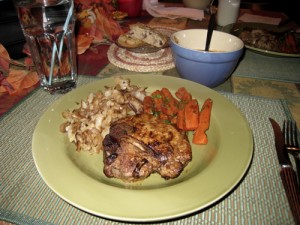 Eventually it was time to start making dinner. We had pork chops, glazed carrots, and some sauteed cabbage. I love sauteed cabbage and onions! YUM! The cabbage gets really sweet as it starts to cook down and it’s so fabbo. I did not eat that entire chop, only about half. After dinner was cleanup and now I’m in here posting.

I indeed had a huge indulgent day, or so it feels like. Time to call uncle and get back on track this week. I’m going to make a fizzie, finish the Pens game and then it’s off to bed to read. Tomorrow is an early day and I want to have plenty of rest. See you on the flip side!!