Hi guys! I decided that by the time I was able to sit down and write a breakfast/lunch post, I might as well wait and do a whole day post! Much easier. 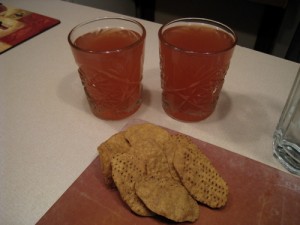 I forgot to post this yesterday! We had some fizzies and FoodShouldTasteGood sweet potato crackers while waiting on dinner to cook. The fizzies are made with mandarin seltzer and some blood orange Italian soda.

We watched some MT fights and then around 8:30ish I headed up to bed to read. It was soooo nice laying in bed and reading. I hope I get to do more of that soon! By 10pm I was ready for sleeps. In fact I closed my book around 9:45 and snuggled with Scott and fell asleep! Thankfully I already brushed my teeth so I was ready for bed. All I had to do was a quick potty run and then I ran back to bed and got all comfy!

Up early this morning for PT, but not early enough. I really truly think I’m just going to have to get up at 6am on Monday mornings. Otherwise I feel way too rushed and cannot enjoy my breakfast nor do I have time to post sometimes! 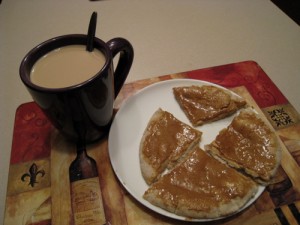 I wasn’t too hungry this morning so I figured oats might be a little much. I opted for a toasted WW pita topped with some PB and honey along with morning coffee + creamer. It was so yummy and I’m loving the WW pitas. They crisp up very nice when toasted or put in the oven.

PT was chest/shoulders and a little bit of time on the treadmill. I’m having a huge case of the Mondays and everything just seems to be making me more cranky. :p My PT went okay but when I was on the treadmill he wanted me to run at 5.0 mph and that’s just too fast for me. I’m not a fast runner by any means and at 5.0mph I was almost tripping so it had to get turned down. He told me that’s normal running speed so I’m bummed that I’m not even running at a normal running speed.

After PT we had to run a few errands and on the way back we drove my new longer running route. I was hoping this would bump me up to 3.0 miles. Nope. It’s not even 2.5 miles. Grrr! So I’m going to have to figure something else out and Google is no help because they have not mapped my neighborhood. It’s not a new area just a place that isn’t a Google hotspot I guess.

I was planning on using the Nike+ because I’m moving over to an iPhone next year when my contract is up. I figured I could kill two birds with one stone and have my phone/music player be one. Well the Nike+ doesn’t work with the iPhone. Which is weird because it’s built into the iPod touch yet no iPhone? What’s up with that?! So now I don’t know what to do. Go refurbished nano and Nike+ and get a different phone, consider the iPhone a wash? Get the iPhone and something compatible with the Nike+? That seems like a lot of money. Meh.

By the time we got back home I was starving! And I wanted breakfast since I didn’t get a traditional breakfast yesterday. As I was unpacking the stuff we just picked up, I noticed one of our bags had a hole in it AND the new chapstick I bought was gone. It must have fallen out of the hole. *sigh* 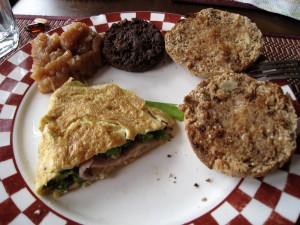 I made a huge omelette for us to share. It had:

I had a wee section of it and the rest went to Scott. Also had some applesauce, 1 Morningstar sausage patty, and 1.5 slices of Ezekiel english muffin on the side. This was my first try of the Ezek english muffins and I like them! Very hearty and dense with a nice chew to it. The kind I got also had lots of nuts and seeds in the mix which was very yummy!

After lunch I took a quick shower and then out the door for Rocky’s walk. It was cold outside! And windy! I would be surprised if it actually made it out of the 30s today.

I did some work, some website stuff, and was waiting around for the cable guy to come and pick up the DVR. Since we have satellite now, there’s no need for the cable service. Our pickup time was between 2pm – 4pm. He didn’t come until around 3:30. And for some reason he had to do something to the cable box outside because apparently WOW just can’t switch off our cable. Weird.

Since it was so cold outside, I decided to use the leftover steaks and make a nice quick stew. 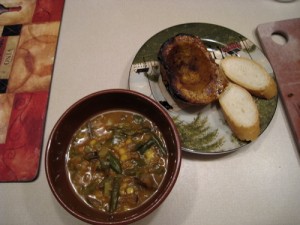 I also used the leftover veggies plus some extras that included more green beans and some corn. It was delicious and hit the spot! I had half of what’s in the bowl, so maybe a cup total? On the side is a roasted sweet dumpling squash. I cut it in half and removed the seeds (it had a lot of seeds for being so wee!) and then rubbed it down with a bit of olive oil. I put it in a small roasting pan with about 1″ of water. I sprinkled a little S&P, chili powder, cinnamon, and some maple syrup on top. Roasted it at 400 for about an hour or so. It was yummy! Not as sweet as I thought it was going to be, but very tasty and super filling! I ate all of my serving plus a few bites of Scott’s half.

I also ate the two slices of French bread + a smidge of butter on each.

Our veggie stash is getting very low and I’m craving a huge salad, which always happens when the veggies run low! It must be grocery shopping time and I feel like we were just there!

Scott and I are staying in tonight. It’s cold and dark out but mostly it’s due to me needing just some down time and him nursing a tooth. A wisdom tooth is bothering him (we both need them pulled) and the side of his face is a little swollen.

He even took a nap today because of it. Awwww Rocks is all snug on the couch with his blankie and I’m off to go get my jammies on. I’m ready for this day to be over and move on to tomorrow which has to be better!