Warning: Parameter 2 to WPE\Site_Preview::the_posts() expected to be a reference, value given in /home/customer/www/foodembrace.com/public_html/wp-includes/class-wp-hook.php on line 303
 Leftover Idea: Stuffing Frittata | Food Embrace 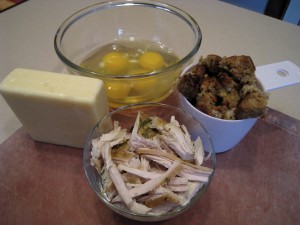 Still plowing your way through leftovers? This is one of my very favorite leftover recipes. I look forward to this all year long! I started doing this a few years back with leftover stuffing and have made it every year since. It’s so easy and so yummy! Perfect if you are hosting guests at your house and they are threatening bodily harm if you feed them another leftover. Disguise it!

Preheat oven to 400 degrees. In a medium sized skillet, drizzle in the olive oil and heat over medium heat. Then add in the turkey and stuffing. Whisk the four eggs and pour that mixture over the turkey and stuffing. Making sure the egg mixture covers the whole thing. Turn off heat and plop in the oven for about 5 minutes until just slightly shy of being set. Turn off oven and remove frittata. Sprinkle top with as much shredded cheddar as you like. Put back in the oven for about 3 minutes until the cheese is melted and frittata is fully set.

Remove from oven, cut into four slices and serve! 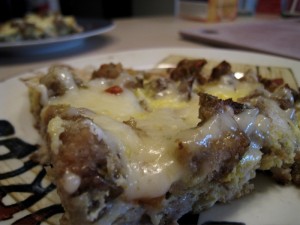 Out of the oven

This dish is so easy to make and takes leftover stuffing to that next level of awesomeness. Stuffing is my favorite part of Thanksgiving dinner, so I’ll look for any excuse to keep eating it! I have made this with just stuffing and no turkey. This year I had a few bites of turkey still in the fridge so I dumped it in. But omitted, the frittata is still just as yummy.

If you have leftover cranberry sauce, some of that warmed and drizzled over top would make a really nice sauce for the frittata. You could also use egg whites in this as well. It’s up to you! Even playing around with the cheese and maybe using a pepper jack for some kick would be great! Get creative with those leftovers! 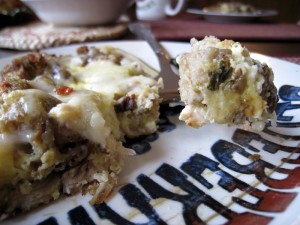 Have fun guys! And remember, always play with your food!