Warning: Parameter 2 to WPE\Site_Preview::the_posts() expected to be a reference, value given in /home/customer/www/foodembrace.com/public_html/wp-includes/class-wp-hook.php on line 303
 TT: Storing Bananas | Food Embrace 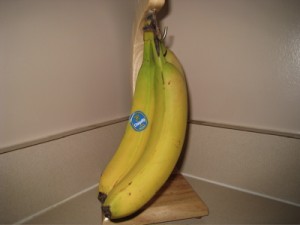 We buy bananas by huge batches when we go shopping. We eat them everyday and so does Rocky, so a large quantity of bananas are required at OHC HQ. I separate them out and store them in different locations all over the house. Scott assumed I was “smoking something” and thought the idea was crazy. I told him bananas make themselves and other fruits ripen at an accelerated rate if kept bunched together. Apparently I was crazy talking.

Literally after years of doing this, he exclaimed to me one day about an article he found that suggested storing bananas in separate batches to slow down the ripening process. “You don’t say?”, I replied. “I guess you aren’t crazy after all!”, he said to me.

Nope, I’m not crazy. Bananas are a fruit that produces high amounts of ethylene (C2H4) gas. This gas accelerates the ripening process of fruits and vegetables. It accelerates it so much that the fruit quickly starts to rot and become inedible before you have a chance to eat it. I have also come across theories that suggest the reason early sailors and pirates suffered from scurvy was because of bananas. They had plenty of fresh produce but they stored that along with bananas not knowing that bananas speed up the ripening process. Which caused the produce to spoil and was tossed before they got a chance to use it. Thus, they didn’t get the required amount of Vit. C and therefore suffered the consequences of scurvy.

The solution is to store bananas (and other ethylene producing produce) away from those that are not high producers of the gas. And it also means to keep bananas away from other bananas, because they have the same result on themselves. I typically store my bananas in batches of threes or fours in different spots around the house. I keep them away from stone fruits (which are super responsive to the gas) and away from veggies, such as tomatoes and peppers, that I store on my counters.

The ideal solution is to be able to hang the bananas up via a banana holder to help air circulation so that the bananas don’t start to over ripen on their own. But just storing them away from each other is a good start to keeping them and other produce from taking a nasty turn quickly.