Hi guys! Let’s get moving and recap the second half of yesterday! 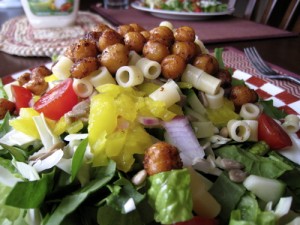 For lunch I made us HUGE salads! It was soo yummy, I only left a few bites on my plate.

Mmmmm! I topped it with a wee bit of Ranch dressing. I made the chickpeas by draining and rinsing a can of them and put them in a baggie. Then I added some olive oil, garlic powder, S&P, and chili powder and shook it up. Tossed them on a cookie sheet and roasted them at 350 for about 20minutes. Yummy! I prefer this method as opposed to heating them via a skillet as the seasonings seemed to stick better roasted. I would have roasted them longer to get crispier but we were both hungry and Scott had a conference call so I needed to bust out lunch. If you like chickpeas give this a try!

Unfortunately as with most salads, if I don’t get protein with it, the salad doesn’t hold me over very long. I needed some sort of snacky and opted for an apple. 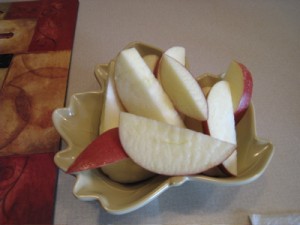 I think this was a gala apple but am not positive. I forgot to check it when I pulled it out of the fridge. However galas are typically what I buy. That held me over for a bit and then I had to figure out something to snack on before MT class. 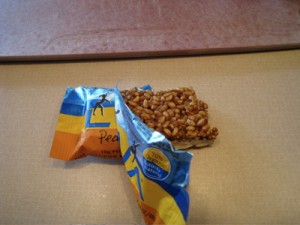 I tried the Luna PB cookie protein bar. Ick! Again way too chalky and I don’t care for that coating stuff they have on the bottom of the bars. I gave it to Scott who also didn’t like it. No more Luna bars for us. Now if I can only find some Lara bars! 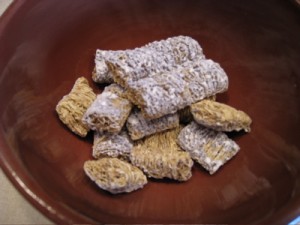 Since I had to eat something else, I decided on having some blueberry muffin mini wheats. After the pic I added some vanilla soymilk.

MT class was small last night which was okay because that means we could have our pick of the bags! I don’t know what happened but somehow I bruised up my left shin by my ankle. It’s got to be from kicking but I can’t think of when I would have done that. We worked on throwing elbows at a different angle and it took me a while to get the hang of it. It shouldn’t have but for some reason my brain just wasn’t making that connection. :p

I was looking forward to dinner all. day. long. And could not wait to eat once we got home. 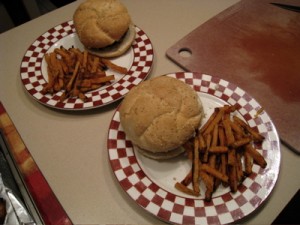 We had leftover turkey burgers and some sweet potato fries. I heated the burgers up in Gracie’s bottom oven and did the fries in the top oven. They are store bought frozen fries and they were very good. I sprinkled them with a little chili powder. Dinner was fantastic and I ate all of my burger first and fries second as we watched last week’s epi of Fringe. I would have eaten all my fries but saved a few for Rocks.

After dinner and Fringe I headed up to bed. I laid there for about 10 minutes talking to Scott and then decided I needed some sleep. I was wiped out!