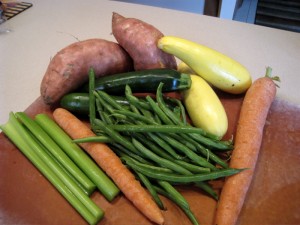 My kid is like his mama in several ways. Cold and rainy days are best dealt with by staying snug indoors with plenty of blankets. Sleeping is by far one of the best activities ever and we love our veggies. Also like me, Rocky is picky about the way his veggies are prepared. And what veggies he likes.

Most raw feeders feed their dogs raw veggies. Rocky isn’t into raw veggies so much. I have discovered after much testing that slightly cooked veggies go down smoother. Also after much testing I have learned what he loves and what he doesn’t. I have finally come up with a veggie combo that he loves and serves as a good base. Sometimes I add stuff here and there but this recipe is the foundation and what goes into every veggie mix.

Dogs can’t digest whole veggies pieces very well. It either needs to be super finely chopped or mushed up. When I make this veggie mix, I go the mush method.

Place all ingredients into a large pot and cover with water. On stove, bring pot to a boil. Boil for five minutes then cover pot and turn off heat. Let sit for 15 to 20 minutes.

With a slotted spoon remove the veggies from the pot and place in a food processor. All the veggies will not fit at once, you’ll have to do batches. I typically do two. Pulse until the veggies are pureed and smooth. Divide veggies out into individual meal portions. I use small storage containers and each one holds two – three meals. Store in freezer until ready to use. 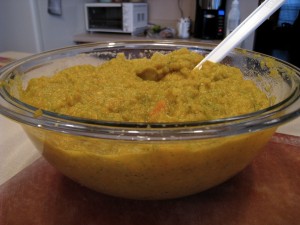 You may think the ingredients picture doesn’t look like a lot, but when everything gets pureed together it makes a good amount of veggie mix. That’s a 2.5L mixing bowl full of veggies. I typically make the veggies when I’m doing other stuff in the kitchen or around the house. I set the pot on to boil and after I turn the heat off and put a lid on it, I go off and do other things. When I make my way back around they are ready to get tossed in the food processor.

His veggie blend sees a lot of uses. Sometimes I mix it with some oatmeal and other times it’s a side to a ground meat mix. I have no troubles getting him to eat his veggies. I have even put this mix in a kong and froze it for his evening snack. Typically though, it’s served with his supper. He doesn’t get veggies as a standalone meal though, it’s always mixed with some other protein source. 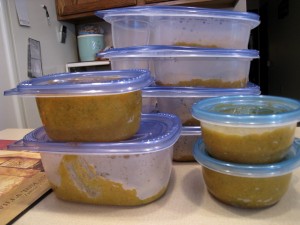 Off to the freezer

Try adding some veggies to your dog’s meal to make it extra special!

ETA: I forgot to give serving amounts, sorry about that!  My dog is 60lbs, I give him 1/3 C or less for a serving.  If you have a smaller dog, obviously you would feed less and if you have a larger dog, could be more.  If this is the first time giving your dog veggies, err on the side of caution and start off with a small amount and work up.