Warning: Parameter 2 to WPE\Site_Preview::the_posts() expected to be a reference, value given in /home/customer/www/foodembrace.com/public_html/wp-includes/class-wp-hook.php on line 303
 October 9th, 2008: Lunch and dinner | Food Embrace

Hey guys! Check out this mammoth moth that was on my deck this morning. 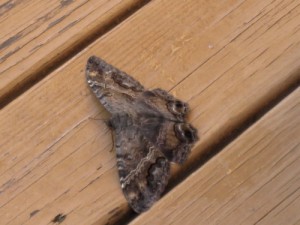 After I posted my entry, I went outside to feed my birdies and this guy was laying on my deck. No lie, the wing span on that sucker was a good 5-6 inches. He was waiting for the sun to come out so he could warm up and fly away. I didn’t want to walk past him because I didn’t want to startle him and then have him try to fly away and hurt himself (or fly up in my face!). So I waited and waited. He was there for a couple of hours. I finally just went off the other side of the deck and walked around.

Okay, now let’s try to breeze through this so I can get my relax on. I feel like I’ve been up and moving for a loonnnnggg time. After posting my entry (and dealing with the moth!) I worked on editing some pics and prepping them for future posts. Then I had to get Scott up so he could start his day. After that, I came back downstairs and started cooking. We are having a SF seminar this weekend and I was preparing things for that. I made some dilly crackers and portioned those out into individual bags. I also portioned out some other snacks. Then I made some sausage and cheese breakfast muffins and got those portioned out as well. Clean up and dish washing once that was all done. Then I went around and dusted the house. After that was the weekly cleanup of scrubbing the kitchen and bathrooms.

Then I showered and we were out the door to the SF dojo to prep it and get it ready for the seminar that starts tomorrow evening. Once we were back home from that I could finally have lunch! I was sooo hungry! I had a handful of raisins before we left and 1/2 of a breakfast muffin but I can’t find that pic. 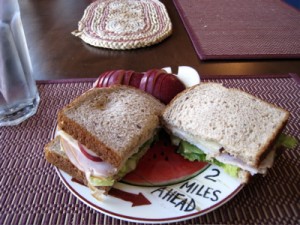 Lunch was a smoked turkey sandwich. Two slices of turkey, some romaine, one slice of swiss, some sliced apples, cranberries, a bit of mustard on omega 3 bread. I had the rest of the apple on the side. After lunch was cleanup. And then I swiffered, vacuumed the hall rug and kitchen rug, and finally mopped the kitchen, hallway, and entryway. 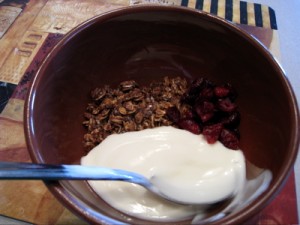 Lunch didn’t last long before I started getting hungry again. I had a bowl of cranberries, some bare naked granola, and three scoops of yogurt. Then I went through my fall decorations and sorted those and decided to decorate a bit. Decorated all of the downstairs and by that time it was dinnertime for Rocks. Fed him and got him taken care of, then I went upstairs to cut Scott’s hair. He just gets a shave so no biggie there. After that was over I could finally start getting dinner prepped! 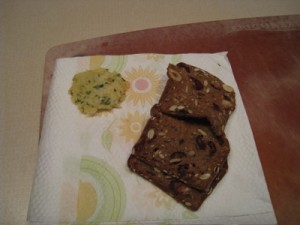 I had one cheese crisp and three raincoast crisp crackers. The cheese crisp is still getting tweaked. This was a bit too garlicky, even for me! 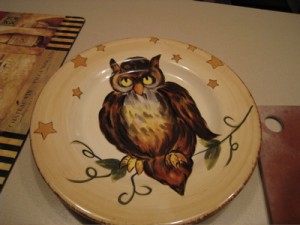 These are some new “halloween” plates I picked up last month. Both Scott and I love owls so I had to have these when I spotted them at the store. I need to go back and get more as we only have two! 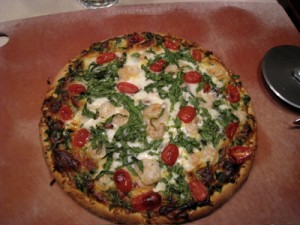 I decided to kick up a Kashi pizza since I didn’t have time to make dough today. This is the Mediterranean style and I added more cheese, some cooked shrimp, sliced grape tomatoes, and some chopped spinach. 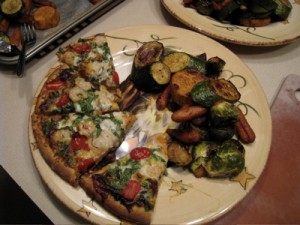 We had that along with some roasted veggie mix which includes, zucchini, brussel sprouts, carrots, and some sweet potato. I had all my veggies and only two slices of the pizza. Now I am going to get some jammies on, pour a glass of wine and call it a night. Holy cow but I’ve been going nonstop all day. See you tomorrow!