Morning guys! I am having one of “those” days and I’ve only been up for three hours which can’t be a good sign. Starting at the beginning, we were able to get out of SF at a decent time. Rocky was walked and I was in my jammies by 10pm. Wooo! I wanted something to drink last night that wasn’t water so I made us some fizzies. 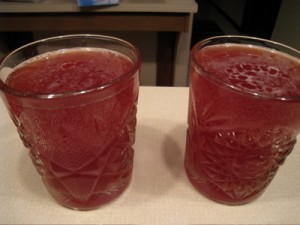 I bought two kinds of Italian soda when I was at Target the other day. Last night I used the Blood Orange one which was heavenly! Seriously I could have drank that all by itself without mixing it, it was fantastic. However I decided to mix it with a little bit of cranberry juice since cranberry and orange are a classic fall flavor combo. Very yummy drink and hit the spot perfectly. 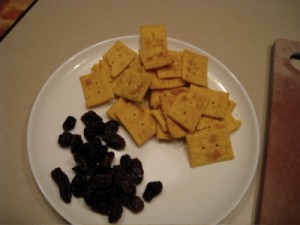 I was a little bit munchy so I made a plate of kashi cheese crackers and some raisins. I split this with Scott, I had a few crackers and most of the raisins. It was already a late night made later by trying to get some of the stuff we have taped watched and deleted. We have some things on the DVR that goes with the cable and we’re trying to clear that before having to turn it back in. Otherwise I would have went straight to bed. We cleared two shows and by that time it was going on midnight when I finally went to bed.

Rocky decided he wanted to get up at 5am this morning.

I herded him back to bed hoping he would let me sleep longer because I only had an hour and a half before getting up anyway. He gave me 1/2 hour and that was it. I got up, fed him, got him out for potty and then changed into my running clothes. Because it was so early, Rocky thought we were going back to bed. He ran upstairs and then ran smack into the bedroom door. I had shut it, which is what I always do when I leave so as not to wake Scott with my morning noises. Rocks was not pleased. Hey mister, I’m not the one who got us up and moving at 5:30. HMPH!

Since it was way earlier than I normally run (by about 45 minutes or so) it was much colder. I found some pants with a zip pocket that I could wear and also thew on a hat. That did the trick in keeping me warm during the run. 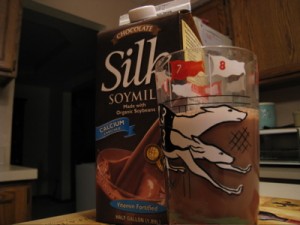 I kind of have mixed feelings about running that early. On the one hand it was nice to be out and not having to worry about anyone else being out doing their thing and becoming an obstacle. On the other hand, it was dark and running by myself in the dark made me a bit anxious. I for sure wouldn’t go out any earlier than 6am. Because even though people aren’t out yet, they are up because I could see the lights on in the houses, so if something were to happen (i.e. someone undesirable decides to approach me) at least I would know people are awake and would hear me if I yelled.

I ran my route and tried getting my HR up but my legs didn’t want to run too fast this morning. No biggie, at least I was out and running, right? Came home and had my CS, then it was back out the door with Rocks. We walked about a block and then he promptly sat down. “Rocky we are walking not sitting. What are you…..oh crap.”

It was at this time he decided to hork up his breakfast. Awesome. Picking up poo is unpleasant enough, so imagine having to scoop up vomit out of someone’s front yard. This was my morning so far.

I picked up as much as I could (sorry neighbors!) and brought him back home. Naturally he was all peppy and energetic at this point. When we got back inside he ran to his little spot waiting for his treat. Um, no. Sorry kid, no treats for you this morning. Mama is not a happy camper. 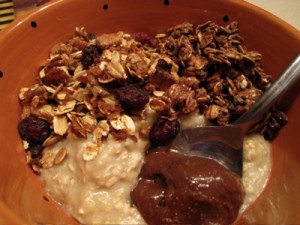 I wasn’t quite hungry yet, but decided to make my oats anyway. I made a monster bowl too! I added a touch more soymilk than usual and took a little more for my portion as well. My mix-ins were 1/4 cup of homemade granola, a bit of bare naked granola, and a huge scoop of dark chocolate PB. 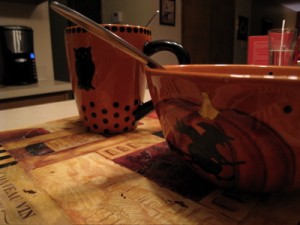 Had that with my morning coffee and creamer. Now I’m starting to get tired again. Well I maybe “again” isn’t the right word because I don’t think I ever fully woke up. :p So perhaps, more tired, is a better phrase. I’m either going back to bed or doing some stuff around the house. Right now it’s a toss up!