Warning: Parameter 2 to WPE\Site_Preview::the_posts() expected to be a reference, value given in /home/customer/www/foodembrace.com/public_html/wp-includes/class-wp-hook.php on line 303
 October 8th, 2008: Breakfast | Food Embrace

Morning guys! I ended up bailing on the debates. We had the channel paused while Scott finished up with the trash and we were about 1/2 hour behind. By 10pm I was passing out and bed seemed like such a great idea. Scott also seemed bored out of his mind (although I wasn’t and was geniunly interested!), so I hit the hay. I thought maybe Scott would have recorded the rest of it for me but I don’t think he did. Boo! I wonder if it’s up on hulu yet? Yes it is!! I just checked, hooray!!! 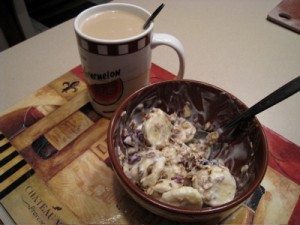 I woke up at 5am to the sound of pouring rain (is that the start to a song? Sounds like it tho.) and knew there would be no running this morning. Which ended up working out because I eventually got a nasty headache. Ow! My head is better now but it’s still raining. I’ve decided to stop being bummed about it and turn the day around. This type of rainy gloomy day is my favorite type of day to clean and cook. So I’m going to do that today! I’ve already lit some candles and with the smell of some stuff cooking, that should turn the day into a comfy one.

For breakfast I had a cut up banana, 1/3 cup of homemade granola, a small handful of cranberries, and 4 scoops of yogurt. Plus a mug of coffee and creamer. I think that has to be one of the most unappealing photos I’ve taken yet! Okay guys I’m off to get cracking on mission cleanup. See you later!

Oh I found it! It is a song (just minus the 5am part). I Remember You by Skid Row. Here ya go! It’s a little blurry but the song is what’s important not the video.