Warning: Parameter 2 to WPE\Site_Preview::the_posts() expected to be a reference, value given in /home/customer/www/foodembrace.com/public_html/wp-includes/class-wp-hook.php on line 303
 October 7th, 2008: Lunch and dinner | Food Embrace

Hi guys! I’m trying to knock this post out quick while Scott does the trash so we can then move on to the debates! Lunch was awesome today. I was craving a salad since I bought a ton of fixins at the store yesterday. 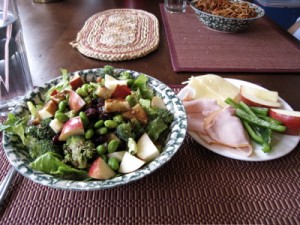 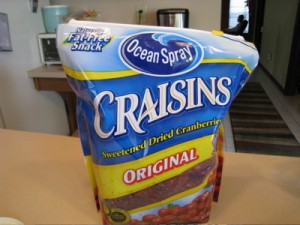 Can you see Scott?

I forget how big but it’s a good couple of pounds and it lasts forever. Wheee! Scott’s in the back of the pic sitting in the office. :p After lunch I did some stuff around the house and then I started getting snacky. I held off as long as I could but had my pre-MT snack early. 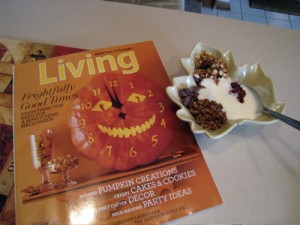 I decided to flip through my Martha Stewart mag as I ate my snack. It was some homemade granola, bare naked granola, craisins, three scoops of yogurt and about 8 chocolate chips just because.

We hit MT class and Scott and I did some light sparring. By light I mean, no headgear or mouthpieces. Except today I did put my mouthpiece in. I didn’t want to get popped in the mouth!

We got home and took Rocky for a quickie walk and then it was time to hit the showers. I started the soup so it could reheat while I showered. By the time Scott was done, soup was good to go. 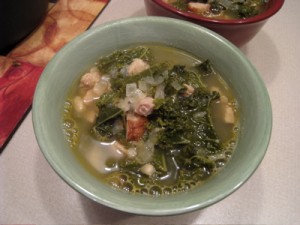 Just some leftover kale soup from yesterday. I did have 1/2 slice of bread with a bit of butter on it. I ate all my soup and I wasn’t into the bread that much which is why I had only 1/2. After dinner, we cleaned up and Scott got the trash ready for pickup. As I was sitting on the couch blogging, Rocky looked up and he had “flippy ear” so Scott took some pics. 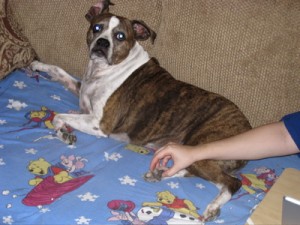 I was rubbing his piggies because he likes that (only mom though, no one else can touch the piggies!) as Scott was taking the pics. 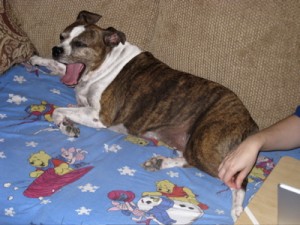 This picture just cracks me up so I’m sticking it on the blog.

Are you loving the Pooh sheets? They are flannel and are awesome. I got those as a gift when I was in college. I stick the fitted sheet on the couch to help keep Rocky’s hair in check. He doesn’t shed much but this helps it from getting into the cushions and makes cleanup easier.

Okay guys I’m off to watch the debates. See you tomorrow!